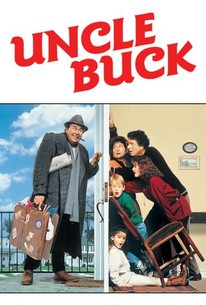 Critics Consensus: Uncle Buck has its ups and downs, but there's undeniable comedic magic that comes from uniting John Hughes, John Candy, and a house full of precocious kids.

Critic Consensus: Uncle Buck has its ups and downs, but there's undeniable comedic magic that comes from uniting John Hughes, John Candy, and a house full of precocious kids.

In this cheerful, lightweight comedy, excruciatingly clumsy, disorganized, and messy Uncle Buck Russell (John Candy) becomes the screens most unlikely babysitter since Clifton Webb in Sitting Pretty. While their parents are away, eight-year old Miles (Macaulay Culkin), six-year old Maizy (Gaby Hoffman) and their teen-aged sister, Tia (Jean Kelly) are left in the care of Buck. Surprisingly, the very inept Uncle Buck entertains the younger children who come to love him and earns the respect of Tia when he rescues her from her worthless boyfriend. However, in doing so, Buck nearly loses his long-time girlfriend Chanice (Amy Madigan). John Candy is delightful in the leading role giving a touching and notable comic performance. Directed by John Hughes in his typical broad style, this youth-oriented comedy is perhaps the best role of John Candy's regrettably brief career. ~ Linda Rasmussen, Rovi

Uncle Buck attempts to tell a heart-warming story through a series of uncomfortable and unpleasant scenes; it's a tug-of-war between its ambitions and its methods.

...Hughes and Candy may take a sloppy, anything-goes approach here, but it works...

The supposedly sweet domestic comedy hits too many sour notes to remain in tune, even if always competent.

One of the many excellent family films from director and writer John Hughes...

It's not John Hughes's best film, but it could be his funniest, as well as his saddest.

There isn't much to love about the movie besides Candy's excellent performance.

...an agreeable comedy that benefits substantially from Hughes' undeniable gift for seamlessly blending laughs with drama.

The Candy man can make this iffy movie taste good.

It's a goofy movie, but also extraordinarily sly, unafraid to permit generous screentime to bizarre jokes and situations of slack guardian supervision.

Uncle Buck is a good comedy from John Hughes, but it is not his best work. John Candy is good here and he brings his zany humor to an average script. I enjoyed Uncle Buck, but compared to other films that Hughes has directed far superior films, and with Uncle Buck, we still see that magic that he has, but his ideas are somewhat lacking, and the film struggles in some areas with the material. There is enough funny bits to make this one worth seeing, and it is a fun and entertaining film that despite it's slow in parts, is never dull due to Candy's always loveable performance. John Hughes' direction is terrific, but at times you can clearly see where the film could have been improved on. Uncle Buck is really funny with a good story and worthwhile performances. If you're looking for a good family comedy to watch, then give this one a shot. John Candy is amusing here, and he makes so-so material better. For me the best collaboration between Hughes and Candy was Planes, Trains and Automobiles, but Uncle Buck still manages to have all the usual elements from a John Hughes movie. The film has a bit of drama thrown into the comedy as well, so you can expect something a bit serious, which is typical of a Hughes movie. Uncle Buck is funny, dramatic and warm hearted all in one movie. However John Hughes has made better movies throughout his career. Candy makes this worth seeing and it is an entertaining film, but it could have been a bit better as well.

Uncle Buck is a very funny movie, and I love John Candy, but sadly the movie was very boring.

Probably one of John Hughes most loveable comedies with a beautiful performance from Candy as 'Buck' in your typical Hughes teen angst cum family fun flick that must please all. The whole film is so Hughes with the lovely suburban setting, big dream house, bratty teens, innocent kids with lots of prat falls and silly childish gags that are predictable yet simply fun. The plot is simple enough as the slobbish Candy must look after his brothers kids for afew days, this of course equals much tomfoolery and bumbling from Candy as he adapts to his new posher surroundings and tries to befriend the kids. Candy's character is alittle similar to his character from 'Planes Trains and Automobiles' to be honest but Candy as we know does it so well, Hughes doesn't mess around and simply gets the best from Candy, the best that he knows will be liked. Macaulay Culkin present here in a pre 'Home Alone' performance that clearly got him that famous role as again his character is pretty similar in both films but he does fit these 80's films so well I gotta admit. Its all very predictable yes but Hughes just had this skill in making golden teen flicks and family films that just worked perfectly even though they were abit samey, a case of everything coming together at the right time for that one time in history which can never be repeated, Candy was the ultimate family comedy character.