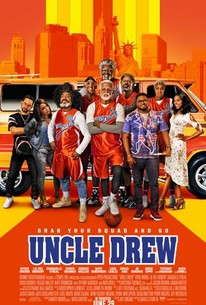 Critics Consensus: Kyrie Irving's crossover to comedy is amiable enough to score with basketball fans, but Uncle Drew is held back by formulaic plotting and too much product placement.

Critics Consensus: Kyrie Irving's crossover to comedy is amiable enough to score with basketball fans, but Uncle Drew is held back by formulaic plotting and too much product placement.

Critic Consensus: Kyrie Irving's crossover to comedy is amiable enough to score with basketball fans, but Uncle Drew is held back by formulaic plotting and too much product placement.

After draining his life savings to enter a team in the Rucker Classic street ball tournament in Harlem, Dax (LilRel Howery) is dealt a series of unfortunate setbacks, including losing his team to his longtime rival (Nick Kroll). Desperate to win the tournament and the cash prize, Dax stumbles upon the man, the myth, the legend Uncle Drew (NBA All-Star Kyrie Irving) and convinces him to return to the court one more time. The two men embark on a road trip to round up Drew's old basketball squad (Shaquille O'Neal, Chris Webber, Reggie Miller, Nate Robinson, and Lisa Leslie) and prove that a group of septuagenarians can still win the big one.

Mike Epps
as Louis
View All

What laughs there are come mainly from Lil Rel Howery as the short, put-upon coach and Nick Kroll as a rival player constantly winding him up.

Instead, Uncle Drew, even for its insider-NBA jokes (how they got Chris Webber to do a timeout quip confounds me), rarely rises above a giggle and a shrug territory.

The story-which is based on a Pepsi commercial-hits facile beats of reconciliation, redemption, and romance, but the men's hearty jibes and the glimpses of their latter-day lives evoke depths of emotion and experience that remain untapped.

The jokes could be dirtier, the plot looser, the basketball action more gleefully ludicrous. Instead, everything feels very competent but safe.

Its heart is in the right place, but some lively performances from the better-than-you'd-expect ballers-turned-actors can only paper over a thin, cliché-riddled script so much.

I didn't find it funny, but it was generally pleasant and inoffensive.

For a sports movie based on a commercial, there's more swishes than misses here.

Never trying to be anything other than it says on the tin, it's an hour and a half of clichéd entertainment.

[It's] little more than a dismissive diversion -- with product placement to spare.

Go sit down in a cool theater for a nice light summer sport comedy that will have you yelling "BUCKETS!" while you laugh a lot.

If you buy a ticket to Uncle Drew you're going to get exactly what you want out of it if not a little less basketball than it needed. As expected, Lil Rel Howery makes a prominent step-up in his first post-Get Out role and balances this thing with a strong sense of comedy and necessary heart. The heavily made-up current and former NBA players are all much better in the acting department than you'd expect if only director Charles "Drumline" Stone III might have spent more time exploring these pleasant personalities on the court rather than more convenient situations the film might have had a chance at finding that balance between Space Jam and White Men Can't Jump that it seemed intent to strike.

Is this film for everyone? No, probably not. But I think there's at least something everyone can enjoy. It's a sports movie with a little bit of romance, comedy, and plenty of heart. So even if you're not out at your local park pretending to be Jordan or LeBron, there's plenty to be enjoyed here. I found it to be a lot like Tag from a few weeks prior. I didn't necessarily laugh out loud more than a few times (dissimilar to what my audience did at the theater), but I found myself connected to these ridiculous characters and smiling along with this wild ride. Reggie Miller and Chris Webber were surprisingly tolerable as actors, and actually pretty funny at times. Kyrie Irving did his best to co-lead a film in which he's in makeup that's "supposed to" age him 60+ years. And of course there's Shaq, who certainly improves upon the last movie I remember him leading, Kazaam. But the film only works if you buy into Lil Rey Howery as Dax, a down on his luck basketball coach who just wants to win the Rucker Park tournament one year. I could do without the Tiffany Haddish storyline, which felt like something out of a lame sitcom, but I bought into his failed basketball career and his aspirations to coach a champion. Sure, you know exactly where the film is going, but if the film succeeds in telling the story it wants to tell, it doesn't necessarily matter the route it took to get there. 6.9/10