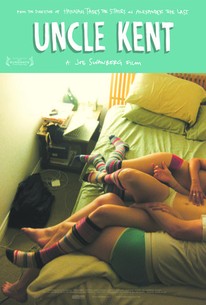 Joe Swanberg makes his first Sundance appearance with his most mature film, UNCLE KENT, an aching true-to-life modern comedy about aging, loneliness, desire, and the awkward intimacies of online friendship. The film follows forty-year-old Kent (Kent Osborne) who is an unmarried children's show writer living alone with his cat in Los Angeles. He spends his days sketching gag cartoons and bouncing ideas off his hyperactive friend, Kev (Kevin Bewersdorf), and his nights staving off loneliness in Internet chat rooms. When one of Kent's online acquaintances, environmental journalist Kate (Jennifer Prediger), crashes at his house for the weekend, he finds himself attracted to her coquettish manner and frank emotional openness but sexually frustrated by her fidelity to a distant boyfriend. -- (C) IFC Films

Uncle Kent is much too intriguing to be discarded as merely twee, softcore hackwork.

If you come in midway you'll think you stumbled upon some unedited webcam feed, but this is, I suppose, the new aesthetic of the avant-garde

The prolific and daring independent filmmaker Joe Swanberg captures the loneliness of the long-term D.I.Y. artist in the age of social networking.

It's a portrait of stunted middle-aged maturity that comes off as a performance of self-gratification.

"Hi, where have you been all my life?" may be learned behavior, but it always sounds good up close... [A] sense of life-just-happens and what-the-------just-happened, those instants just before cheeks flush and unwelcome memories etch.

Swanberg seems to be making films that can be mistaken for reality TV shows, except his characters are the type that would never be considered for such programming because they are a bit too uncolorful, almost but not quite milquetoast-y.

'He used to do tricks with his penis' isn't really character development.

Ultimately, if Kent learns anything, it's that he's probably too old for all this crap -- and that's a mature realization for a film genre usually known for its youth and 'hey, whatever' attitude.

...the latest underwhelming drama from a man who stubbornly refuses to grow as a filmmaker...

There are no featured audience reviews yet. Click the link below to see what others say about Uncle Kent!