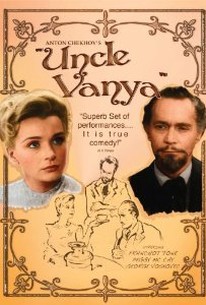 Using his own money, actor Franchot Tone mounted this courageous film version of Anton Chekhov's Uncle Vanya. The cast is the same as the one seen in Tone's stage production of 1956, with one exception: Signe Hassso, who'd played Elena on stage, is replaced by Tone's then-wife, Dolores Dorn-Heft. Translated by Stark Young, the screenplay follows the Chekhov original faithfully: Tone is cast as Dr. Astroff, who falls in love with a woman beyond his reach. All the while, Sonia (Peggy McCoy), the woman who loves Astroff, is neglected and ignored. The titular Uncle Vanya (George Voskovec) watches the passing parade of humanity, embittered over the opportunities missed in his own life. The sets are cardboard and the lighting inconsistent, but the acting in Uncle Vanya is first rate. Completed in 1958, the film did not receive a general release until 1960.

There are no featured reviews for Uncle Vanya at this time.