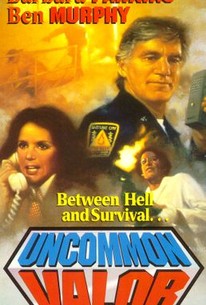 The pilot for an unsold weekly series, Uncommon Valor stresses the courage and resourceful of a team of firefighters in Salt Lake City, Utah. Headed by dauntless batallion chief Tom Riordan (Mitchell Ryam), the unit tries to drench a raging conflagration at County General Hospital (a disaster enhanced by some pretty good special effects). They also have to battle the villain of the piece, discreetly described in the original network press release as a "deranged arsonist." A production of Sunn Classic Pictures, the made-for-TV Uncommon Valor originally aired January 22, 1983, on CBS.

... the stars of this show are the special-effects people... It's enough to keep one watching despite a want of interest in whether the surgery under way in the west wing will be carried through successfully...

There are no featured reviews for Uncommon Valor at this time.