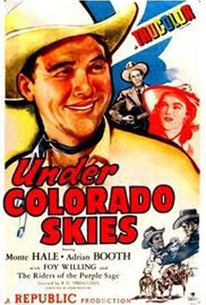 Under Colorado Skies is one of the last of eight Trucolor westerns starring Republic singing cowboy Monte Hale; thereafter, Hale would do his yodelling and gunslinging in black-and-white. The star plays a medical student who pays his way through school by working in a frontier bank. When outlaw Marlowe (William Haade) and his gang rob the bank, Hale is accused of being Marlowe's "inside man." In fact, the real culprit is Jeff (John Alvin), brother of Hale's sweetheart Julia (Adrian Booth). Our hero nobly shields Jeff from prosecution, leading to complications aplenty before he can bring the Marlowe gang to justice. Helping Monte Hale in the musical department are Foy Willing and the Riders of the Purple Sage, late of Republic's Roy Rogers series.

Foy Willing
as Foy Willing (Leader, Riders of the Purple Sage)
View All

Critic Reviews for Under Colorado Skies

There are no featured reviews for Under Colorado Skies at this time.