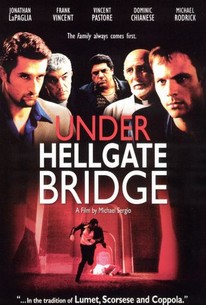 Soap icon Michael Rodrick stars in this gritty urban drama about love, jealousy, and crime set in Queens, New York. After returning to the old neighborhood from a two year stint in jail, Ryan (Rodrick) discovers that his girlfriend has started dating mobster Vincent (Jonathan LaPaglia). Soon a vicious rivalry develops with ugly results. Under Hellgate Bridge was screened at the 1999 Montreal Film Festival.

Critic Reviews for Under Hellgate Bridge

The performances are correspondingly overblown and the soundtrack inundated with grandiose choral music and mediocre hard rock.

Robotic acting and outtakes from the Stigmata soundtrack complement the perfunctory plot, while the dialogue indulges massive backstorytelling and desperate iteration.

From start to finish, it feels like an amalgam of various other crime movies.

A hard-edged gangster revenge movie which suffers from a budget too small to enable it to rise to its rightful place as a major crime genre film.

It's less than ordinary in every which way.

It may not be as epochal a piece of work as Mean Streets, but packs what feels like a real-life punch none the less.

For an updated -- but not revisionist -- version of Dead End or Angels With Dirty Faces or even Mean Streets, you could do worse.

Seems to be cut from the same cloth as almost every low-budget mobster film.

Audience Reviews for Under Hellgate Bridge

There are no featured audience reviews yet. Click the link below to see what others say about Under Hellgate Bridge!