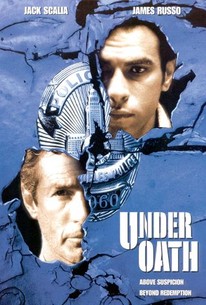 Two honest men discover how high the stakes can be when they turn against the law in this thriller. Nick Hollit (Jack Scalia) and Ray Ramirez (Eddie Velez) are a pair of police detectives who have played by the rules all their lives, but have little to show for it. Determined to make some big money once in their lives, Nick and Ray strike a deal with a man who brokers deals in illegal weapons. However, the setup turns sour when a meeting becomes a gun battle, and the arms dealer is killed. Nick and Ray manage to escape, but they soon discover the man who lost his life was actually an FBI agent who had set up the deal as part of an undercover operation. Nick and Ray think they may have gotten away clean until they're put in charge of the investigation into the killing; covering up the trail of evidence that would implicate them turns out to be more difficult than they imagined, and soon leads them into a very dangerous situation. Also released as Under Oath and Blood Money, Urban Justice also stars James Russo and Richard Lynch.

Critic Reviews for Under Oath

There are no critic reviews yet for Under Oath. Keep checking Rotten Tomatoes for updates!

There are no featured reviews for Under Oath at this time.