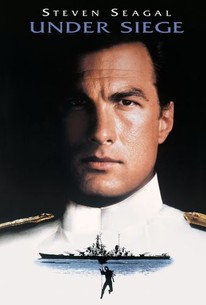 Critics Consensus: A well-directed action thriller that makes the most of its confined setting, Under Siege marks a high point for early '90s action -- and its star's spotty filmography.

Critics Consensus: A well-directed action thriller that makes the most of its confined setting, Under Siege marks a high point for early '90s action -- and its star's spotty filmography.

Critic Consensus: A well-directed action thriller that makes the most of its confined setting, Under Siege marks a high point for early '90s action -- and its star's spotty filmography.

Andrew Davis directed this exciting thriller starring Steven Seagal, sans ponytail, and featuring electric, over-the-top performances by Gary Busey and Tommy Lee Jones. This action saga takes place on the battleship USS Missouri, about to be decommissioned from service after a visit from George Bush. When Bush departs the vessel, a band of terrorists overcome the remaining skeleton crew and take over the ship, under the ruse of holding a surprise birthday party for the ship's commander, Captain Adams (Patrick O'Neal). The band is led by Strannix (Jones), a disgruntled ex-CIA operative, and his right-hand man, the psychotic Krill (Busey). The terrorists plan to steal the ship's store of nuclear warheads, transfer them to a stolen North Korean submarine, and sell them to a Middle Eastern country. Unfortunately for Strannix, he has overlooked the ship's cook, Casey Ryback (Seagal). Ryback is a much-honored Navy SEAL who, because of a minor scandal, is quietly completing his twenty-year tour in the galley of the Missouri. Forced into action, Ryback, along with the woman who jumped out of Captain Adams' birthday cake (Erika Eleniak), knocks off the bad guys one-by-one while crawling inside the bowels of the ship.

Eddie B. Smith
as Shadow

Gene Barge
as `The Bail Jumpers'

Richard Davis
as `The Bail Jumpers'

Tad Robinson
as `The Bail Jumpers'

Hiram Bullock
as `The Bail Jumpers'

David U. Hodges
as Bridge Watchman

Drucilla A. Carlson
as Captain Spellman

Critic Reviews for Under Siege

Die Hard on a ship, this Steven Seagal starrer is a hard-charged, perfectly detonated actioner that should especially delight especially macho mainstreamers.

The tension and humor level tail off a bit toward the conclusion, but Steven Seagal and Chicago director Andy Davis clearly declare themselves as top-flight talent.

I walked into the screening in a cynical frame of mind, but then a funny thing happened. The movie started working for me.

If you only see one Steven Seagal movie (and you really don't even need to see one), be sure it's this one.

The story, ridiculous and formulaic though it is, is told with a certain wit and panache.

Seagal, it turns out, is only as good as his director.

I'm not sure the wife or girlfriend would approve, but for the man of the house, it's above-average beer-and-pretzels material.

A big step above Seagal's usual dreck thanks to skillful direction by Andrew Davis and strong villains played by Tommy Lee Jones and Gary Busey.

Audience Reviews for Under Siege

Here we go, Steven Seagal's response to Bruce Willis and 'Die Hard', his very own Die Hard and quite possibly the first film after 'Die Hard' to be labelled with the 'Die Hard on a...' tag. What's even more amazing is this is a superb action flick that not only looks damn slick, sounds damn cool and plays out reasonably realistically for the most part, but its easily one of Seagal's best (and he ain't got many). Plot...a battleship loaded with dangerous nasty weapons and a full crew, its hijacked by a crazy ass bad guy and his endless team of henchmen (plus a dirty double dealing Officer of the ship). People are killed, the rest are locked up leaving only one man, that man is a cook, that man is...STEVEN SEAGAL. Its now up to Steven Seagal, the most lethal, most dangerous, most stealthy badass ex-Navy SEAL ever! to save the day and terminate every last bad guy with extreme precise knife wielding prejudice. So yeah the film is a total play on a certain McTiernan classic, the setup is the same, the execution, the way the film unfolds, hell there's even the same explosion whilst leaping off a high ledge sequence. The only real difference here is Seagal has a rather pointless sexy female that follows him around like a lost puppy, she adds nothing and she does pretty much does nothing accept show us her lovely tight ass at the start. What I do like about this film is the realistic aspects of it. Filmed in part on a real battleship this naturally helps sell the whole concept and it does look really good. This in turn gives you the claustrophobic tightness of the battleship interior which makes fights, booby traps and gun battles even more tense and exciting. I also really enjoyed seeing Seagal go all 'A-Team' on us with his little death traps and tricks using various objects and interior fittings, unsure how realistic they all were but I'm sure they are true to life. Also nice to see Seagal getting assistance from a few freed crew members which again adds a nice touch of believability to the story, its not completely Seagal the killing machine. Although the excuse for using Erika Eleniak is still wafer thin, literately there just for that one strip sequence methinks. All other aspects of the military including lingo, scenarios, meetings, weapons, procedures etc...all seem top notch, I do believe a lot of care is taken with this kinda of thing especially with Seagal. Of course the whole idea of hijacking a battleship seems ridiculous as there would be so many men on board, so many places to hide, hold up and run to and probably various ways of communication/alerts that I'm sure it would impossible. The film relies heavily on two factors, the invincible hero in Seagal and the scenery chewing villains, namely Jones and Busey. The whole film is so obvious right from the start, everyone knows Busey is the bad guy, he looks just like his character from 'Lethal Weapon', he's a bad guy clearly. Busey is basically you're standard villain, he's just the perfect bad guy every time, bad guy classes 101, hire Busey with his crazy blonde hair and huge teeth, the perfect slime ball. Jones of course is also clearly a bad guy but feels a bit miscast for me, doesn't really come across as an ex-CIA kinda guy or an insane hippie. Plus I can understand why he wants to get even after they tried to eliminate him. Anyway Seagal looks in good shape here, he's trim, no ponytail, his fight sequences actually look half decent and more importantly he's kinda believable too. Not too many cheesy one liners but a more straight laced no nonsense fella, of course every film Seagal stars in he plays an invincible ex-military/ex-cop superman type so there's nothing new here. The whole film is sharp and action packed yet none of it looks over the top, its all pretty grounded which is why its well remembered. Great gun battles, cool looking hardware, authentic settings and some really good violent fights, the workshop fight makes you wince here n there. Only down side for me was the rather anti-climatic finale and ending, oh and the close up shot of Seagal's stern mug as he salutes is hilarious, unintentional of course.

Under Siege is one of those films that relies on previous action flicks to create its plot. Despite this, this is a fun little flick that is purely mindless from start to finish. With this one, Director Andrew Davis delivers a heavily flawed picture that is very predictable, but is pure popcorn action. The dialogue, I have to say is the worst aspect of the film as it is very tongue in cheek and pretty cheesy. This film is basically Die Hard on a battleship. We've seen this type of film before, but it manages to be a thrill ride and offer something worth seeing for viewers of action films. The script has plenty of imperfections; however the action is exhilarating and makes for an entertaining picture that manages to overcome its flaws. Under Siege relies more on the action to compensate the paper thin, predictable plot. Tommy Lee Jones is the best actor here and he delivers a menacing and worthwhile performance that stands out above every other actor. This is a popcorn flick pure and simple; however don't expect anything great with this film. This is one of those films that you've seen many times before, and by this point, you've better genre films, with a really convincing plot. Under Siege is flawed and could have been much better, luckily Jones plays a great villain and it's what keeps you interested in the film. I've never been a big Steven Seagal fan, and I'm still not. But here he's entertaining and with his sidekick Erika Eleniak armed with two massive canons, they have what it takes to take out the threat and make this a cheesy good time.

This is definitely one of the high points of Steven Seagal's career, maybe because it is his second time working Andrew Davis, who seems usually seems to deliver the goods when it comes to thrills and excitement. The story revolves around the final voyage of the USS Missouri, the battleship where the official surrender of the Japanese and the end of WWII took place. It's making its final trip from Pearl Harbor back to the mainland where it will be retired and displayed with dignity. The voyage doesn't go all that smoothly though, as an embittered CIA operate has gone rogue and, along with the help of a band of elite commandos and a turncoat officer aboard the vessel, he takes command of the ship and its weapons supply, with domination and conquest as his main goals. However, all hope is not lost, as a cook aboard the ship named Casey Ryback happens to be an ex- Navy SEAL who isn't about to surrender without a fight. Billed as "Die Hard on a ship" this is an exciting action thriller. Yeah the main plot isn't new or original, and Seagal is still pretty wooden, but the films excels due to the great cinematography and location shooting (the USS Alabama fills in for the Missouri), the awesome action and fight scenes, and two wonderfully over the top and nutty performances from Tommy Lee Jones and Gary Busey as the main antagonists. There's also some appearances from a couple of Davis regulars, as well as blink and you'll miss them cameos from Ving Rhames, Roger Corman, and apparently George A. Romero. The movie is maybe a tad silly, but it is undeniably fun. Occasionally it is also genuinely suspenseful, but nothing quite to the level of Die Hard or heck, even the later Air Force One. If you want a decent action thriller, and want to see one of the better Seagal films, then go ahead and give this one a watch.

Despite many technical flaws such as plot holes and not actually making much sense almost at all, Under Siege is still an entertaining and immensely likable film and by far Seagal's best one. It's got a decent script with equally good acting, and quite a few laughs provied by an energetic Tommy Lee Jones.