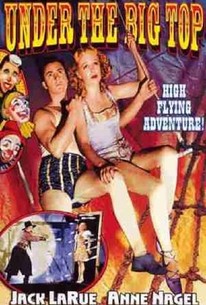 Veteran cinematographer Karl Brown also had several directorial efforts to his credit. Most were on a par with Monogram's Under the Big Top: slick and mildly entertaining, but not much more. Circus aerialist Penny (Anne Nagel) may be the queen of the trapeze, but she can't seem to manage her life on solid ground. She spends most of the film as the romantic bone of contention between her partners Pablo and Ricardo (Grant Richards and Jack LaRue incongruously cast as brothers). Hostilities break up the act, but by film's end the hatchets have been buried and "The Three Flying Pennies" are soaring again. Future "Ma Kettle" Marjorie Main has a sizeable role as a circus manager.

Charlene Wyatt
as Penny as a Child

Aleth Hanson
as Marty
View All

Critic Reviews for Under the Big Top

There are no critic reviews yet for Under the Big Top. Keep checking Rotten Tomatoes for updates!

There are no featured reviews for Under the Big Top at this time.

Under the Big Top Quotes