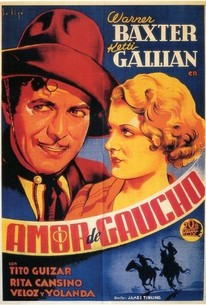 Under the Pampas Moon Photos

In this western-style musical, a rakish gaucho rides off across the Argentine pampas to Buenos Aires in search of his stolen horse. Once there, he soon engages in hot pursuit of a lovely singing señorita. Soon he discovers that her manager just may be the thief he has been looking for. Keep a sharp eye out for a young Rita Cansino (later known as Rita Hayworth) in an early performance as a dance hall girl. Songs include: "Zamba" (Arthur Wynter-Smith), The Gaucho" (Buddy De Sylva, Walter Samuels), "Querida Mia" (Paul Francis Webster, Lew Pollack), "Love Song of the Pampas," "Veredita," and "Je t'Adore" (Miguel de Zarraga, Cyril J. Mockridge).

Veloz & Yolanda
as Dancers in Cafe

Critic Reviews for Under the Pampas Moon

There are two exciting horse races, one very good song, and a marvelously comic performance by Soledad Jimenez.

There are no featured reviews for Under the Pampas Moon at this time.

Under the Pampas Moon Quotes