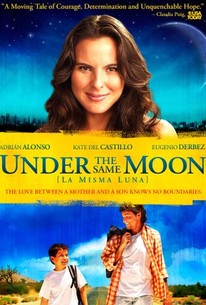 Critics Consensus: If Under the Same Moon is often manipulative, it is also heartfelt, and features strong performances from its leads.

Critics Consensus: If Under the Same Moon is often manipulative, it is also heartfelt, and features strong performances from its leads.

Critic Consensus: If Under the Same Moon is often manipulative, it is also heartfelt, and features strong performances from its leads.

Under the Same Moon Photos

The debut feature from director Patricia Riggen, this drama centers on a young boy's journey across the U.S./Mexico border to be reunited with his mother. Adrian Alonso stars as Carlitos, a Mexican adolescent living with his grandmother while his mother works as a maid in the U.S., hoping someday to send for her child. But when the grandmother dies unexpectedly, Carlitos must sneak across the border and seek out his mother. Featuring a supporting performance by America Ferrera of ABC's Ugly Betty, Under the Same Moon premiered at the 2007 Sundance Film Festival, where it received a standing ovation. ~ Matthew Tobey, Rovi

News & Interviews for Under the Same Moon

View All Under the Same Moon News

Critic Reviews for Under the Same Moon

Its parallel stories of two lost souls seeking each other across geographical divides is never more than one small step away from mawkishness and cliché, and oftentimes less. But as a sociological study, it's fascinating.

It's a bit of a guilty pleasure, with its formulas and its sap, but if it can get Lou Dobbs reaching for that Kleenex, it will have done its job.

It's a warm drama that humanizes Americas current illegal immigration debate even as it sentimentally stacks the deck in favor of the undocumented.

The performances -- and the movie's sideways glance at the culture of illegal immigrants, including a funny song about Superman ('He has no social security and no green card') -- give the movie its nicely controlled vitality.

Under the Same Moon combines all the elements of an old-fashioned tear-jerker with the low-key, low-budget intelligence of a carefully crafted indie film.

The strong final third counterbalances the weaknesses of the first half.

Unfortunately, many of the poignant moments are overwhelmed by a routine and formulaic narrative.

May be predictable and sentimental, but it's impossible to question its conviction.

Tiptoes the line between tragedy and hope and never loses its balance in its account of life and luck in the US-Mexican borderlands.

Story of seperated mother and child doesn't carry much emotional impact. Makes you wonder how much mi madre really cares. Turns into a road drama with the kid headed to Los Angeles. Just couldn't care for the characters. Paul Chambers, CNN.

Under the Same Moon puts a human face on illegal immigration. More than that, it gives it a human heart.

Some plot twists and encounters go beyond broad brushstrokes for complex characterizations to make corny seem meaningful. Cast and music add richness beyond the predictable.

Audience Reviews for Under the Same Moon

It feels like ages for me since I last saw a movie from South America since I mostly see Asian and North America releases a majority of the time. While the Under the Same Moon doesn't break any new ground it's still a sweat and heartfelt movie. Under the Same Moon is about a Mexican boy crossing the Mexico/US Border to reunite with his mother. The story itself is not anything new, but it does it well sometime taking in our characters in a different direction and unfortunately in clichés territory. Sure the clichés could be annoying as we seen them time and time again, but the movie doesn't rely too heavily on them to avoid becoming predictable. This movie does switch between two characters, one being a boy looking for his mother and the other being a mother struggles in America. Both are well written and very believable. Though I will say the son side of the movie does have some filler and the mother side is not as interesting since she primarily an adult who's knows how to take care of herself while her son is not. While it certainly won't captivate everyone the same way, it's certainly a story with a lot of heart between the main characters. The cast might be unknown to some us, but their performances help elevate the material from being average. Adrian Alonso is actually a good child actor whose performance does outshine most of the adults of the movie and he'll definitely grow on you like he did me. Kate Del Castillo stole the show from pretty much everyone in the movie; it's only unfortunate that her character side of the story wasn't as well written. The direction while it works could have been better, though it's worth complaining since it's still turned out good. If you listen to Spanish music you'll be happy with the selection of music in the movie and appearance by a popular band. Under the Same Moon is a heartfelt story that's made better with the cast performances. It might not be anything new sure, but it's still worth a watch.

The Love Between a Mother and Son Knows No Boundaries

A surprise (for me anyway) cause i thought this would be total garbage (which it isn't) and I regret my initial comments about this film. The film could use some better writing and directing, and it's filled with clichés. Also, it depicts some aspects of Mexican culture in a wrong way (WTF with the pop-tart and jalapeños??!!) and the soundtrack is terrible. But, the performances totally save the film: Adrian Alonso and Kate del Castillo are REALLY good, and Ernesto D'Alessio did a nice job. Eugenio Derbez and Carmen Salinas were their usual selves (not a good thing) and America Ferrera's appearance was good, but definitely unnecessary. The ending is perfect and it (ALMOST) made me cry...

Under the Same Moon Quotes