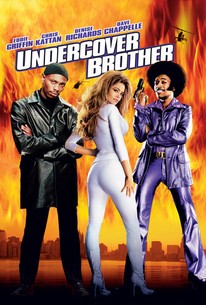 Undercover Brother began life as an animated series on the Internet. The satirical cartoon was created by novelist and screenwriter John Ridley (Three Kings) for the website /urbanentertainment.com. Ridley wrote the screenplay with Michael McCullers, co-writer of the Austin Powers sequels, and it was directed by Malcolm D. Lee (Spike Lee's cousin, and the writer/director of The Best Man). The film stars Eddie Griffin (of TV's Malcolm and Eddie) as Undercover Brother, he of the gold Cadillac convertible and huge Afro, who uses gadgets and disguises to steal from the rich and give to the poor. His activities are discovered by the B.R.O.T.H.E.R.H.O.O.D., a spy organization devoted to subverting The Man (Robert Trumbull) and his henchman, Mr. Feather (Chris Kattan), who use their power over the media to demean black people and destroy racial unity. The spy organization is run by The Chief (Chi McBride), who is constantly screaming at his subordinates. They include Sistah Girl (Aunjanue Ellis), a beautiful martial artist, Conspiracy Brother (Dave Chappelle), who sees white supremacist plots everywhere, and Smart Brother (Gary Anthony Williams, who provided the voice of Undercover Brother in the cartoon), who supplies the operatives with gadgets and information. When a popular black political figure, General Boutwell (Billy Dee Williams), calls a press conference, presumably to announce his presidential candidacy, and instead announces that he's opening a chain of fried chicken restaurants, the B.R.O.T.H.E.R.H.O.O.D. rightly suspects foul play, and recruits Undercover Brother to look into it. He goes undercover as an uptight buppie to work for The Man, but his cover is soon blown, and the seductive White She Devil (Denise Richards) is sent in to use her feminine wiles to destroy Undercover Brother.

Chi McBride
as The Chief

Robert Trumbull
as The Man

James Brown (II)
as Himself

Stereotype-based satire; not for young kids.

It's breezily entertaining and culturally specific without resorting to gross-out jokes or cruelty.

Much of Undercover Brother plays as a funnier, if similarly addled, Bamboozled.

It's far from perfect -- as many jokes fall flat as succeed -- but like Undercover Brother himself, it's smarter than most, and twice as solid.

Instead of packing an R-rated, politically incorrect punch, the film goes for the easy laughs without getting too raunchy or violent, and the result is mildly amusing but mostly mediocre.

Even the soundtrack selections are second- or third-hand.

"Undercover Brother" fares better as a blaxploitation spoof than as silly-spy shtick. Scathing but not scatological, "Brother's" withering insights are equal opportunity: Here, white guilt is as satirically punishable an offense as propping up prejudice.

Much funnier and craftier than it had any right to be.

Every little piece of this project fell magically, hilariously in place, even if some of its gags don't quite hit the target.

The problem is, that half the time I laughed myself silly, while the other half, I was egregiously offended.

...zips along at a frenetic pace, but the lack of plot does eventually catch up with the rest of the movie.

Not for one moment does it get serious or stop for a straight action sequence, and yet it develops into something genuinely exciting, just through the enthusiastic velocity of its streams of jokes and images.

Literally too funky to be believed, Undercover Brother is an over-the-top hilarious spoof of Blaxploitation and spy films. Not since "I'm Gonna Git You Sucka" have I seen a send-up like this. There are shades of Shaft, Superfly, Huggy Bear, and more, along with James Bond-ish spectre-type "the man" to boot. Its loads better and hipper than Austin Powers: Goldmember.You'll laugh out loud over and over. Eddie Griffin is outstanding as the title character, and smart brother, conspiracy brother (Dave Chappelle), Sistah Girl, and White She-Devil will leave you in stitches. I didn't like Neil Patrick Harris' character, a lame white boy, much, but loved over the top nemesis Chris Kattan. Billy Dee Williams and James Brown add credibility to this hilarious parody. Its politically incorrect in the extreme so don't get offended by the catfight scene and other, just have fun. Final Advice: Long live the BROTHERHOOD, and stay away from the fried chicken!

Undercover Brother: You mess with the 'fro, you got to go. It's an understatement to say that I'm disappointed with Undercover Brother. I had fun for about 20 minutes and then it gets old and it gets old quickly. That would be because it's a one-joke comedy and you can only hear a joke so many times before it's not funny anymore. The movie was way to mild also. If your going to go for a Blaxploitation type movie; then go for it. This being PG-13 destroys it in my eyes. This type of movie can't survive without without tons of violence, nudity, and profanity. That's just how it is. The movie does have some bright spots. It features a really good soundtrack. Eddie Griffin isn't horrible in the lead role, but Dave Chappelle and Neil Patrick Harris are the two actors to watch in this one. Denise Richards, while attractive, annoys the hell out of me no matter what she's in. I can't stand her. Basically Undercover Brother doesn't entertain me throughout. Yeah it's going to be stupid and I'm fine with that. But what it shouldn't be is dull and boring. After awhile it does become dull and it does become somewhat boring. It just can't maintain the laughs and that will kill a comedy every time.

this movie is hilarious. I love how racist it is. a great comedy. B+

I loved how funny this movie was. I could watch this movie everday if I had to!