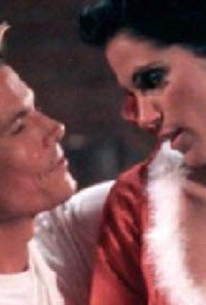 When Undercover Christmas first aired over CBS on December 7, 2003, a number of critics lauded the film for its "fresh" and "unique" storyline--blissfully unaware that the film bore a marked resemblance to the 1940 Fred MacMurray-Barbara Stanwyck vehicle Remember the Night. Jamie Gertz tops the cast as Brandi O'Neill, a sassy cocktail waitress who is the "great and good friend" of billionaire Scott Shift (Cameron Bancroft). Determned to nail Shift on a tax fraud charge, FBI agent Jake Cunningham (Shawn Christian) figures that Brandi will make an excellent federal witness, and takes her into protective custody. Unfortunately, not long afterward Jake receives word from his mother Anne (Tyne Daly) that his father Joe (Winston Rekert), a very wealthy and very conservative jurist, has suffered a heart attack--and that it would behoove Jack to come home for Christmas to see his dad just one more time. Naturally, Jake is forced to take Brandi along to meet his folks, who are shocked beyond measure when, to avoid compromising his case against Shift, Jake passes Brandi off as his new girlfriend! Things get dicier still when it turns out that Joe Cunningham's heart attack was just a sham to force Jake to come home and get his annual dressing-down for not living up to his parents' hopes--and all the while, Brandi begins to really enjoy her new luxurious surroundings, and seriously considers latching onto Jake for keeps.

Tom Carey
as Buddy No. 1

Chad Nobert
as Buddy No. 2

Rod Heatherington
as Buddy No. 3

Rainer Kahl
as Howard
View All

Blue-collar moxie will, of course, save this family from its blue-blood resentments.

A little cheesy at times, but really cute. I liked how different it was from most Christmas movies.