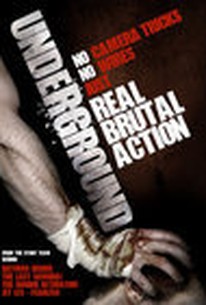 Twelve ultimate fighters who all practice different disciplines convene in the ring for the ultimate battle royal in this action thriller set in the deadly world of underground fighting. With elements of kickboxing, boxing, wushu, karate, tae kwon do, mixed martial arts, wrestling, capoeira, freestyle ninjitsu, and kung fu, and fighters who have appeared in such popular action films as Batman Begins, Blade II, and The Bourne Ultimatum, this is one trauma-filled fight fest that doesn't pull any punches. Twelve hand-picked fighters will step into the ring, but only one can emerge victorious. ~ Jason Buchanan, Rovi

There are no critic reviews yet for Underground. Keep checking Rotten Tomatoes for updates!

There are no featured reviews for Underground at this time.