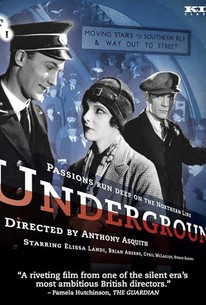 Anthony Asquith's second film, Underground is a silent film that tells the triangular story of a young shop girl named Nell (Elissa Landi) and the two men who find themselves in love with her. One of these is Bill (Brian Aherne), a porter for London's underground; the other is Bert (Cyril MgLaglen), who works as an electrician at a power station. Nell chooses Bill for her love, but Bert does not take kindly to this news. He convinces his mistress, Kate (Norah Baring), to lie and pretend that Bill attacked her. Nell knows that this couldn't be true; she confronts Kate, who admits that Bert forced her to act in this way. Angry and with no further use for her, Bert breaks off totally with Kate, who then finds Bill and asks him to please take her to the power station so she can beg Bert to take her back. Bert loses his temper and kills Kate, then runs off to hide in the underground, pursued by Bill. The killer is eventually apprehended, and Bill and Nell are left to themselves at last.

The story of Underground may be simple, but its treatment is unexpectedly dark, stylized, and violent

Asquith's style reaches its own "highly charged" apogee of externalizing the characters' emotions.

Underground is a witty, highly imaginative piece of film-making by a director now largely regarded as an efficient craftsman.

There are no featured reviews for Underground at this time.