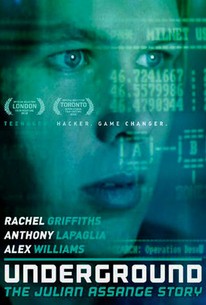 An ambitious young computer hacker uncovers classified government documents in a Pentagon database, and discovers the true power of information in director Robert Connelly's biopic exploring the teenage years of WikiLeaks founder Julian Assange. The year is 1989. Upon acquiring a Commodore 64, 18-year-old computer wiz Julian (Alex Williams) adopts the pseudonym "Mendax", and forms a hacker group known as the International Subversives with two of his best friends. Before long, the group begins gaining access to all manners of sensitive websites. But they operate on a strict code: stealing is prohibited, they are to remain completely invisible, and any information they uncover must be shared with the group. When Julian accesses a Pentagon database containing evidence that the government has deceived the public about a recent military offensive, however, he sees an opportunity to become the voice of truth in the age of deception. Meanwhile, police detective Ken Roberts (Anthony LaPaglia) learns that capturing a talented computer hacker is no simple task. ~ Jason Buchanan, Rovi

There are no critic reviews yet for Underground. Keep checking Rotten Tomatoes for updates!

There are no featured audience reviews yet. Click the link below to see what others say about Underground!