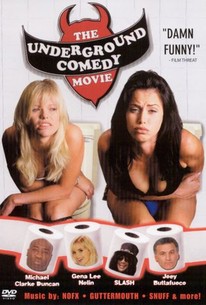 First-time filmmaker Vince Offer crashes through the outer limits of bad taste in this wildly outrageous collection of comedy sketches. Adapted from material Offer first worked out on a public-access television series, The Underground Comedy Movie includes a gender-switch parody of The Godfather, a cross-dressing version of Dirty Harry, a "Batman" who attacks criminals with a Louisville Slugger, the misadventures of a gay virgin out on the town, a take-off on Randy Newman's song (and music video) "I Love L.A.", a beauty pageant featuring bag ladies as contestants, swimmers being attacked by sharks while a lifeguard ogles beautiful women, and plenty of stuff not too rude to describe in this context. The cast includes Michael Clarke Duncan (in a bit shot before his rise to fame), Gena Lee Nolin, Slash, and Joey Buttafuoco.

Dante
as Dancer at Lake

If you're looking for the ultimate movie to clear your house of partygoers who don't know when to leave, look no further than this DVD.

Anyone offended by unbearably bad films, jokes that are not funny and wasting 90 minutes of their lives is, as promised, guaranteed to be offended.

I've seen a lot of films but the Underground Comedy Movie is one that I wish I hadn't. Made by the Shamwow guy, it was extremely kitsch despite the good intention.