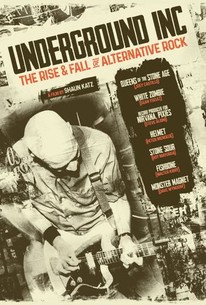 This film is the ultimate look at the uncensored energy of alternative music's revolution, its meteoric rise to mainstream dominance in the wake of Nirvana, and the raw talent of those who made it big, and then lost it all. Discover some of the greatest music that was buried in an era when art and the business collided through firsthand accounts from those who lived it -- band members, managers, producers, all accompanied by powerful concert and performance footage. Revealing a never before look at artists, torn between their medium, freedom of expression and the lure of major label money and potential fame.

There are no critic reviews yet for Underground Inc.: The Rise & Fall of Alternative Rock. Keep checking Rotten Tomatoes for updates!

There are no featured reviews for Underground Inc.: The Rise & Fall of Alternative Rock at this time.