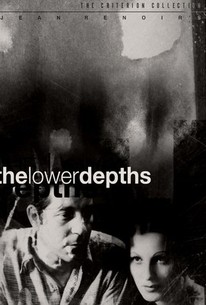 Voted 1936's best picture by a circle of prestigious French critics, Jean Renoir's The Lower Depths (Les Bas-Fonds) is based on the "gutter" play by Russian author Maxim Gorky. Louis Jouvet plays The Baron, forced by circumstance to give up his life of luxury and to set up residence in the slums of Paris. As Jouvet observes the passing parade, he bears witness to the frustrated romance between Jean Gabin and Junie Astor, the thwarted dreams of actor Robert Le Vigan, and the oppressive cruelties of landlord Vladimir Sokoloff. The Lower Depths surprised Renoir's admirers, who weren't used to seeing the director involve himself in so sordid and depressing a tale. Actually, the project was brought to Renoir by a producer friend of his, who secured the director's services by promising to provide Louis Jouvet and Jean Gabin as the leading actors. Renoir's The Lower Depths would make a fascinating companion piece to Japanese filmmaker Akira Kurosawa's 1957 adaptation of the same Gorky play. ~ Hal Erickson, Rovi

Louis Jouvet
as The Baron

Gabin and Jouvet are their usual glorious selves, though the tendency towards pessimism makes this one of Renoir's less rewarding films.

It carries some interest in its curious blend of tones and styles -- it oscillates between vaudeville turns and stark tragedy.

Renoir sought out balance and humanistic sympathy, reshaping the narrative so the thief (Jean Gabin) and the Baron (Louis Jouvet) bond over their mutual rebellion against the social system.

Gabin did not attain the international status of American counterparts or later countryman Belmondo, though his Pepel here is a thing of beauty.

The text is Gorky's, the names and the whiskers are Russian, yet the world here is wholly French, or, rather, wholly Jean Renoir's

The result is powerful, if frequently uncomfortable, viewing.

The Lower Depths both gains and loses by its proximity to Renoir's later masterpieces: It's not one of them them, but the same guy made it.

The relationship between Gabin's Pepel and Jouvet's Baron is a brilliant one -- Renoir pointing to their internal similarities by stressing their external differences.

it may well be a bastardization of gorky's play but i found it completely charming. louis jouvet is wonderful as the dissolute baron and jean gabin is my hero as ever. i still need to see kurosawa's version which is said to be grittier but i can't help but forgive renoir for loving his characters too much to see them suffer in the end

Looks good, but is missing a punch.

i watched this film after i saw kurosawas japanese version, and this one was just as good. this is a french film about people who live in poverty. the characters are interesting and the story was told well. you really admire some of these people, and others come across as almost happy and peaceful despite thier circumstances. really good film.