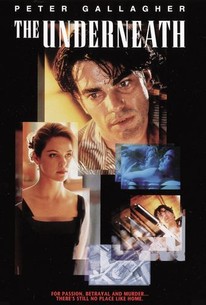 Director Steven Soderbergh jazzes up the 1949 Burt Lancaster film noir classic Criss Cross with elaborate flashbacks (and flash-forwards) in this tale of a collection of losers involved in an armored car robbery. Peter Gallagher stars as Michael Chambers, a man whose obsession with gambling ruined his marriage and drove him away from his home town of Austin, Texas. He returns to town to attend the wedding of his mother (Anjanette Comer) to Ed Dutton (Paul Dooley), a genial security guard who works for an armored car company. No one is very happy to see Michael return -- his brother David (Adam Trese), now a local cop, hates his guts; his ex-wife Rachel (Alison Elliott) feels no better about him. Michael wants Rachel back, but Rachel has a new lover, local nightclub owner Tommy Dundee (William Fichtner). Nevertheless, Michael hangs out at Tommy's bar to re-acquaint himself with Rachel. Gradually, Rachel warms up to him again and she invites him to spend the weekend with her. Unfortunately, Tommy is psychotically jealous and he suspects something is amiss. He follows Michael and Rachel to their rendezvous and bursts in on them. Michael, to diffuse a volatile situation, proposes an armored car heist with Tommy and Rachel. After that, the double-crossings and back-stabbings begin.

John Martin
as Justice of the Peace

Wheel
as Band No. 2
View All

Critic Reviews for The Underneath

Too chaotic to work as a thriller.

What The Underneath lacks is the kind of emotional connection that the best film noirs have. Instead of involving, this film is distancing, too given to admiring its own shiny surface.

Downbeat, laconically funny, arty (maybe a touch too arty), it's simmering, smoldering lowlife fun, like a good episode of Twin Peaks without the self-conscious weirdness.

A departure from the run-of- the-mill thriller.

Why did Soderbergh want to remake an old film noir, anyway? Take out the crime elements and flesh out the human elements here, and you have a more interesting movie, I think.

A solid, but unremarkable neo-noir.

...an erratic yet mostly rewarding thriller that benefits substantially from its strong performances and often enthralling visuals...

Stylish, arty and quite enjoyable.

An absorbing, if an occasionally plodding, experience.

One of Soderbbergh's weakest (and unnecessary) films, this exercise in film noir, a remake of the 1949 classic Criss Cross, is marred by weak dialogue and formulaic plot, again stressing the need of a gifted helmer like Soderbergh for stronger narrative

Audience Reviews for The Underneath

Ed Dutton: Michael, when you get to be my age you realize that sometimes the planets just don't line up. And there's nothing you can do about it.  "For passion, betrayal and murder... there's still no place like home." First off, I haven't seen Criss Cross, so I'm judging this movie based only on itself. It's definitely my least favorite film from Soderbergh. The acting is bad and the dialogue is also horrible. Peter Gallagher, while by no means a terrible actor, just can't hold a movie like this up by himself. William Fitchner is good in his role, but it is still to small to make the movie any better for it. The worst acting comes from two women though, Elizabeth Shue and Alison Elliot. They made ever scene that they were in unbearable to watch. Michael returns home because his mom is getting remarried. His new stepdad offers to help him get a job as an armored truck driver. It is pretty obvious what is going to happen from here. He's going to try to pull off a robbery. Along the way, he tries to rekindle his relationship with his ex-wife, who is now married to a crook. The only saving grace in this film, is Soderbergh's cool little tricks that you see in all his movies. In the end, it isn't enough to save an overall worthless film. The movie meanders on at an amazingly boring rate for an hour and then decides to speed up for the last thirty. Then the plot gets all twisty and it just doesn't work. I didn't buy the ending at all. Still, it's worth a look if you are a Soderbergh fan. If not, this definitely isn't going to make you one. It would probably just turn you against him more.

A not-so-bad remake of an excellent film noir. If you're a Soderbergh fan, it might do something for you, but if not, seek out the original, Criss Cross.