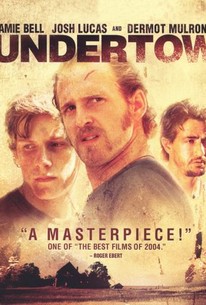 Chris (Jamie Bell of Billy Elliot) is a volatile teen who lives with his father, John (Dermot Mulroney), and his little brother, Tim (Devon Alan). After the death of Chris' mother, his reclusive father moved the family to a shack in backwoods Georgia, where they raise hogs. Tim has an unusual eating disorder. He is constantly making himself sick by eating things like dirt and paint. One day, John's estranged brother, Deel (Josh Lucas), gets out of prison and shows up on the farm. John is less than thrilled to see him, but agrees to let him stay with the family as long as Deel helps him look after his boys. Chris is drawn to his wild-man uncle, but it soon becomes clear that Deel has more on his mind than a family reunion. Greed and years of resentment lead to violence, and Chris finds himself on the run, towing his sickly brother along, with Deel in pursuit. Undertow is writer/director David Gordon Green's third feature film, and features many of the same crew as his previous films, George Washington and All the Real Girls, including cinematographer Tim Orr. Green, who co-wrote the script with Joe Conway, has cited the influence of filmmaker Terrence Malick, who is credited as a producer. Green was also influenced by low-budget regional films of the 1970s (like Macon County Line and The Texas Chainsaw Massacre) and by Charles Laughton's classic The Night of the Hunter. Undertow was selected by the Film Society of Lincoln Center for inclusion in the 2004 New York Film Festival.

Pat Healy
as Grant the Mechanic

A deep-fried piece of Southern Gothic that wears its unpleasantness like a merit badge...

Green's signature pastoral tangents and codeine pacing don't slow down this tale of two boys fleeing their psychotic uncle so much as inappropriately slacken any of the story's suspenseful aspects.

A front-loaded film, sure, but what a front.

Green's characters often find themselves in raw, unprotected moments, but Undertow also can feel a little too mesmerized by its own junkyard visions.

The film's first half is hypnotically watchable.

The characters are too arbitrarily drawn, they verge on the merely eccentric.

This white trash fairytale is no masterpiece, but its sinister otherworldliness deserves to be applauded.

A tense and entertaining murder thriller about redemption and greed...

While it has lulls and sleepy moments, Undertow also full of startling truths and beauties, as well as offering a window into a side of the country that movies rarely bother to look at.

Looked promising, but ultimately underwhelming. Also, Kristen Stewart is in this for about ten minutes, if that, so don't let that be a deciding factor in watching this! The first few minutes seemed interesting and it had it's moments, including a small appearance by Shiri Appleby, but I just found it did not hold my attention particularly well.

Jamie Bell, Devon Alan, Dermot Mulrony, Josh Lucas, Kristen Stewart "Can I carve my name in your face?" David Gordon Green is surely becoming one of my favorite directors. I have read that they call his directing "Southern Gothic". I like it. His movie's are not predictable. Undertow is set in the South of Georgia, and its a dramatic thriller about two brothers, Chris and Tom, who are on the run from their greedy Uncle Deel after the death of their father. It's really sad. The youngest brother is ill and likes to eat odd things like paint and mudd. On their journey they come in contact with some characters that help them on their way. Really great performances from Devon Alan. He becomes the character, it's like he isn't even trying. Loved that, exspecially for him being so young. Jamie Bell is a favorite of mine. I thought he was amazing. Josh Lucas was really good. Seen a few of his movies lately and I really like his work acting.

Heartbreaking yet very fulfilling in accomplishment.

Southern Gothic tale of a family in crisis. Jamie Bell plays Chris Munn, a volatile teen who runs away from home, bringing his sickly brother along. Deel Munn, the boys' uncle, pursues them. Why, is a question best left answered by watching the movie. However, the reason will be the only excitement you'll find in this rather uninteresting film. The random characters the boys meet along the way are a poor excuse for a plot. Two plusses: another great score by master composer Philip Glass and some stylish cinematography by Tim Orr.