Underworld: The Rise of the Lycans2009 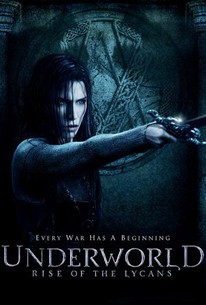 Critics Consensus: Despite the best efforts of its competent cast, Underworld: Rise of the Lycans is an indistinguishable and unnecessary prequel.

Critics Consensus: Despite the best efforts of its competent cast, Underworld: Rise of the Lycans is an indistinguishable and unnecessary prequel.

Critic Consensus: Despite the best efforts of its competent cast, Underworld: Rise of the Lycans is an indistinguishable and unnecessary prequel.

Underworld: The Rise of the Lycans Videos

Underworld: The Rise of the Lycans Photos

The Underworld series gets the prequel treatment with this third outing that fleshes out the story of the ancient war between the vampiric Death Dealers and their wolfman counterparts, the Lycans. F/X technician Patrick Tatopoulos (Godzilla, Independence Day) steps out of the effects lab and into the director's chair with this entry, which sees stars Bill Nighy returning as Viktor, the king of his vampire clan and father to Sonja (Rhona Mitra), a free-minded heir who tests her parent by heading outside of their castle's borders and doing battle with the ravenous werewolves of the surrounding area. Sonja also has a secret love affair with Lucian (Michael Sheen), the first of the Lycans, a race of lycanthropes who were bred by the vampires to be slaves and protectors to the bloodsucking clan. As the news of their love spreads to Viktor, ranks of the vampire elite help Lucian escape, leading to a revolution of the Lycans against their masters and setting up the mythology of the later latexed adventures featured in Len Wiseman's two previous films. ~ Jeremy Wheeler, Rovi

Critic Reviews for Underworld: The Rise of the Lycans

Basically it's Frost/Nixon to Dross/Vixen. And there's plenty to be ashamed of.

The numerous action sequences, while imaginative, lack a visual cohesion that allows them to be fully appreciated.

It is not necessary to have seen the first two Underworld films to fully enjoy the third. It might be helpful, however, to first see a bartender.

The storyline essentially replicates that of Underworld and Underworld: Evolution, meaning that if you've seen one or both of them, there's no compelling reason to spend your hard earned dollars on the third.

Underworld: Rise of the Lycans is as unnecessary as it is uninvolving. Only fans desperate to learn how the whole vampire-werewolf conflict began are likely to get anything out of this viewing experience.

Underworld: Rise of the Lycans is surprisingly campy fun, mostly succeeding through the power of its lead performances.

Likely to only please fans of the first two films.

Energetic, dark and satisfying, it does exactly what it says on the tin.

A period piece that drips mediocrity from the minute it begins.

Left with only a small pocket of timeline to embroider, the prequel manages to develop a breezy, bloody, operatic experience. Even better, it wipes away the toxic awfulness of Evolution. It's now safe to return to the Underworld.

Lacks the Gothic coolness that made the original such an underground hit.

...can't help but come off as an obvious high point within this progressively low-rent series...

Audience Reviews for Underworld: The Rise of the Lycans

Hmmmm double edged sword here methinks. I liked this for its imagery and ideas, my love for vampire and werewolf films sways me to the dark side and I can't help but love the blood dripping, hairy moon walking action :). Problem is although there are some nice lycan moments of battle action and great misty dark looks there are just so many silly moments and things that just don't add up. For starters I have these questions... 1. Why does 'Viktor' have blues eyes yet no others vampires do? 2. Why do the vampires need protection from the lycans? protection from what? 3. Why do they need lycan slaves? 4. Why are most lycans long haired men? no females? 5. When 'Viktor's' daughter was put to death why didn't Lucian just turn to lycan form and free her? (as he did when he attacks 'Viktor' after her death, he breaks his chains without a problem) 6. How come 'Raze' (big black guy) can just rip dungeon doors off at the final battle sequence? why didn't he just do that at first to escape? 7. What happened to the human nobility? 8. Why were there humans chained to the back of the human nobility's wagon? (where we meet 'Raze') There are just so many questions that spoil the film, I also hated the endless stream of armour clad vampires that just live to die from lycan attacks, much like 'stormtroopers' hehe. The film is good and does complete the trilogy nicely but its very holey plot wise. The effects are nice, lots of CGI of course but its reasonable. Some slightly risky lycan CGI in places but the vampire makeup and costumes are excellent, Nighy's blues eyes really pierce the darkness. I just wish to see more of the vampire background in the underworld universe, vamps around the globe, how the species started originally, their hierarchy or nobility outside 'Viktor' etc.. I could watch another film about the vampiric history of this franchise but unfortunately we got a rather stupid futuristic idea that harks to 'Resi Evil'...bad move. Despite that and lots of bad reviews I do like this film for what it is, you get what you expect but bucket loads of it in medieval times with extra blood. For me the most fun of the franchise as it felt a little more original than the others. The first being 'The Matrix' with vamps and werewolves, the second being almost a love interest film and the fourth being a mess of too many other film ideas. Overall it could all be so much more with better CGI/real time effects that's for darn sure.

A surprisingly decent and enjoyable film that is a departure from the previous two entries. I really didn't enjoy the second film, and I was skeptical about this one. I was surprised it wasn't a total waste. The film was better, but it also had its fare share of flaws. The film although interesting in its idea, shows that the filmmakers were struggling with the material that they conceived for this prequel. The film tends to try too hard at delivering a competent story. Despite its potential, the film never succeeds entirely at being a great film. The result is a decent popcorn flick that is much better than the second film, but is overdone. I feel they should just have stuck with the basics instead of over complicating the story. The Underworld franchise has always been about mindless action horror, but where most of the films fail is that the filmmakers tend to put far too much content in its story just for the sake of it. This is a decent third film, one that should appeal to fans of the series. I feel though that a lot more effort could have been put into the films plot to truly make in engaging. However, this series goes for mindless action first, effective story telling second. But the films have delivered anything truly great story wise either. This prequel is decent for what it is, but leaves a lot to be desired as well. Worth watching if you're a fan of the first films, but of all the Underworld films that really stands, the original is the best one to watch. Rise of the Lycans is a decent take at a prequel despite its flaws.

"Underworld Rise of the Lycons" is a prequel, which tells the tale of how the war began between Lycons and the Death Dealers. The story was told in the first "Underworld", but here it is fleshed out, and shines a good light into the hatred between Viktor(Bill Nighy) and Lucian(Michaeal Sheen). Lucien is basically Viktor's personal pet, and the Lycons are slaves to Vampires. Lucien starts a forbidden relationship with Viktor's daughter Sonja(Rhona Mitra), and Viktor is not to pleased. What would happened because of this starts a war that last centuries. I fully expected to not like this movie, which is probably why I waited nearly three years to watch it. However, I enjoyed it, and this it's probably the best of the three movies. The story is generic, and the effects are about the same. But, the biggest difference here is Sheen's performance. He's a great actor,and here he lifts the movie pretty much all by himself. Still, not a great movie, but it's a good watch.

I went in to this expecting nothing good. No Kate Beckinsale?? How could it be good. well i was surprised. Solid sci fi/ fantasy with decent acting. Good effects and an effective telling of the backstory of the original Underworld.

Underworld: The Rise of the Lycans Quotes