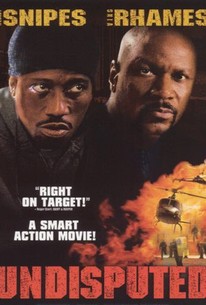 Critics Consensus: While not the deepest boxing movie out there, Undisputed is successful at hitting its aspiration of being nothing more than a genre picture.

Critics Consensus: While not the deepest boxing movie out there, Undisputed is successful at hitting its aspiration of being nothing more than a genre picture.

Critic Consensus: While not the deepest boxing movie out there, Undisputed is successful at hitting its aspiration of being nothing more than a genre picture.

Director and screenwriter Walter Hill returns to one of his favorite themes -- desperate and violent men using force to escape from an unforgiving environment -- in this action drama set behind bars. Monroe Hutchen (Wesley Snipes) was once a promising heavyweight contender until he was convicted of murder and sentenced to life without parole at the Sweetwater maximum security prison in California. Now, Hutchen boxes behind bars, and he's become the champion of a loosely organized prison fighting circuit. When heavyweight champion James "Iceman" Chambers (Ving Rhames) enters Sweetwater after being convicted of rape, Hutchens finds the serious competitor in the same lockup for the first time, though Chambers scoffs at the jailhouse champ. After Hutchens challenges the arrogant Chambers to a bout, aging mafioso Emmanuel "Mendy" Ripstein (Peter Falk) swings a deal that will earn Chambers an early release from prison and pull in a million dollars in bets from guards and inmates if the two men will meet in the ring for a last-man-standing bout without referees. Undisputed also features Michael Rooker, Fisher Stevens, rapper Master P, and former Yo! MTV Raps host Ed Lover.

Master P
as Rapper No. 1

Silkk the Shocker
as Rapper No. 2

C-Murder
as Rapper No. 3

Bruce A. Young
as Charles Soward

Drawing on torn-from-the-headlines events and B-movie history, Hill and his co-writer, David Giler, fill out their premise with hardboiled irony and gusto.

With flashbulb editing as cover for the absence of narrative continuity, Undisputed is nearly incoherent, an excuse to get to the closing bout ... by which time it's impossible to care who wins.

Hill looks to be going through the motions, beginning with the pale script.

Walter Hill's prison-boxing flick Undisputed could have been a great B, but it represents a failure of nerve.

A shrewd and splendidly volatile B movie structured around a highly original gambit of suspense.

It's dead in the water before the climax.

[A] rock-hard, streamlined "B" movie.

A solid, efficient B movie that holds the screen masterfully for an all-too-brief 90 minutes.

As with any boxing movie or fight card, the main event doesn't come until the very end, and like too many pay-per-view packages the undercard is underwhelming.

We have no idea where these characters have been, so we don't care where they're going.

Too reliant on its already-dated "topicality" and listlessly coasting on a laundry list of prisonyard plot points.

The Mike Tyson story this could be, Mr Chambers (Rhames) goes to jail for an accusation of rape and becomes an even bigger media typhoon than he was before. At first I didn't think much of the film to be honest, it was cliched and kinda boring really plus Rhames as 'Chambers' was an annoying character who you wanted to see beaten. I soon discovered that my feelings towards Chambers actually fuelled my enjoyment as the film continues and Snipes character 'Monroe' comes into play. The tense build up between the two up to the obvious finale does get you going. Lets not get over excited here this is your typical 'Rocky-ish' story with all the usual characters, dialog and scenes, not original but a good beat em up when the fists fly. The final fight is well done and you do feel the blows as Snipes and Rhames match up and sweat over each other, I'm pretty sure Rhames would win in a real fight though as he looks pretty darn solid.

A solid prison drama with strong performances by Wesley Snipes and Ving Rhames, but the film lacks in any form of human emotion or character study and just leaves a dark shell that isn't totally filled and makes you feel unsatisfied. But it's not to say it isn't well-crafted from it's director, Walter Hill. It also has one of the best boxing showdowns shown in a film since the original Rocky and Raging Bull.

Not a film that holds your attention well. Overacted, over the top on the fight sound effects, hugely energetic fighting for a heavyweight fight. You really are not missing out on anything by skipping this film.

A very solid boxing film set in prison. Almost seems to be aimed at one World heavy weight champ in the real world! The boxing scenes are done very well, but the build up isn't as good as say the better Rocky films. Not a bad effort and worth watching when it's on.