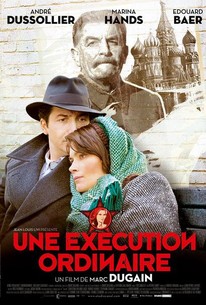 Novelist Marc Dugain both wrote and directed this screen adaptation of his novel about the last days of one of the 20th Century's most infamous leaders. In 1952, Jospeh Stalin (Andre Dussollier) is in failing health after a long tenure as the unquestioned ruler of the Soviet Union. Stalin is also in the market for a new personal physician, as his longtime doctor has fallen to one of the leader's frequent purges of people he regards as untrustworthy. Anna (Marina Hands) is a doctor who has a fine rapport with her patients, and some believe she has a gift for healing that goes beyond the abilities of modern medicine. Anna is recruited by Stalin's underlings to become the ruler's new doctor. Anna and Stalin get along well at first, but as he opens up to her, she discovers that beneath his charm is emotional instability and a vindictive streak that borders on madness. Anna also gets a personal taste of the dictator's methods when she mentions her troubles having a child with her husband Vasily (Edouard Baer); not long after Stalin recommends a divorce, Vasily is visited by the secret police and ends up in a forced labor camp. While Anna has sworn to do no harm, she begins to ponder just is at stake as she tries to keep Stalin alive and well. Une exécution ordinaire (aka An Ordinary Execution) was an official selection at the 2010 Seattle International Film Festival. ~ Mark Deming, Rovi

Critic Reviews for An Ordinary Execution

Always mesmerising, Dussollier's Stalin is a portrait of a leader whose frailties are matched only by his capacity for evil.

It is permeated with a gut-wrenching reality about a historical period that's insufficiently understood and in present-day Russia viewed through rose-tinted glasses.

At times overcomplicated with needless plot additives, but with no previous filmmaking experience Dugain has produced a taut and thoroughly enjoyable historical drama.

Dramatically speaking it's a bit too flat and seems more suited to theatre...

With a thoughtful and introspective tone, this film continually surprises us as its story unfurls and a young doctor's life takes a strange and portentous turn, colliding with one of history's most notorious figures.

Shot in a gloomy palette of greys and browns, Execution offers a chilling re-creation of everyday life under Stalin.

André Dussolier (MicMacs) is perfect as the Russian despot, managing to convey the sense of someone physically fragile at the same time as inspiring constant dread

There are no featured reviews for An Ordinary Execution at this time.