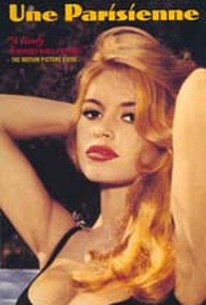 Variously titled La Parisienne and Une Parisienne, Parisienne, this Franco-Italian co-production is one of Brigitte Bardot's best vehicles. The daughter of the Premier of France (no, not DeGaulle!), La Bardot is married to Henri Vidal, the premier's chief aide. When Vidal shows signs of straying from his marital vows, Bardot decides to fight fire with fire. She enchants visiting nobleman Charles Boyer, who invites her to a romantic rendezvous on the Riviera. The outraged Vidal tracks down the would-be lovers, only to discover that nothing has happened-both Bardot and Boyer fell victim to head colds, and spent the weekend sneezing rather than smooching. ~ Hal Erickson, Rovi

There are no critic reviews yet for Une Parisienne. Keep checking Rotten Tomatoes for updates!

There are no featured reviews for Une Parisienne at this time.