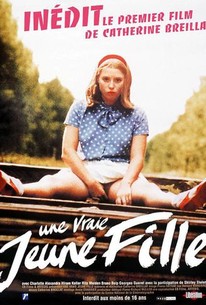 Directed by Catherine Breillat in 1975 but withheld from release for 25 years because Breillat's producer went bankrupt, Une Vraie Jeune Fille marked the director's feature debut. Like Breillat's controversial Romance (1999), Fille is concerned with the expression of female desire, and it takes a characteristically audacious approach to its subject. Striking close-ups of male and female genitalia, various bodily fluids, and graphic sexual fantasies make up a significant portion of the film, which charts the sexual awakening of the teenaged Alice (Charlotte Alexandra), who is vacationing with her parents in the country. Bored and restless, Alice spends much of her time lusting after Jim (Hiram Keller), a local sawmill worker. When not lusting after him, Alice fills the hours with such pursuits as writing her name on a mirror with vaginal secretions and wandering the fields with her underwear around her ankles. And, in true teenaged tradition, she spends a lot of time writing in her diary. Une Vraie Jeune Fille was adapted by Breillat from her third novel, 1974's Le soupirail, which she was commissioned to adapt for the screen by noted producer Andre Genoves.

Rita Meiden
as The Mother

Bruno Balp
as The Father

An intelligent coming-of-age story about a girl who realizes, for better or for worse, that there's no turning back.

A surreal voyage into adolescent sexuality.

While the film could be construed as pornographic in nature, the intention of the narrative function is to examine the psyche and sexuality of a young girl within the political and social context of Niort, France in 1963.

To Breillat innocence is little more an imaginary state, something to yearn for while dealing with life, one orifice at a time

It plods along, from one dull scene of mundane 'ordinary' life to the next.