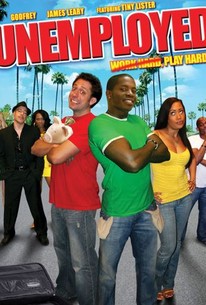 Two out-of-work do their best to find a job and make the rent in this comedy starring Godfrey and James Leary, and featuring Tiny Lister. It's been well over a decade since Jamal and Dex hit the audition circuit in search of that career-boosting breakthrough role, and neither has managed to land so much as an onscreen speaking role. Now fresh out of cash and facing eviction, Jamal and Dex begin pounding the pavement in search of a job despite a rather serious lack of experience, skill sets, and ambition. If they could just catch a break before the end of the day, perhaps these two lovable losers can manage to keep a roof over their heads long enough to land the audition they've been waiting for.

Demetrius Navarro
as The Producer

Sam Sarpong
as Himself

Rayne Aspengren
as Twin No. 1

Merlynne Williams
as Twin no. 2

There are no critic reviews yet for Unemployed. Keep checking Rotten Tomatoes for updates!

There are no featured audience reviews yet. Click the link below to see what others say about Unemployed!