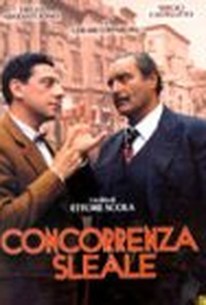 The insidious emergence of state-sanctioned anti-Semitism in Fascist Italy sets the stage for this historical drama. In 1938, Umberto (Diego Abatantuono) is a tailor who is beginning to lose business to Leone (Sergio Castellito), a haberdasher whose shop is next door to Umberto's. Leone offers stock much like Umberto's and at lower prices, which has brought plenty of customers into his store, causing Umberto no small amount of annoyance. Umberto's ire is hardly soothed by the fact that his teenage son Paolo (Elio Germano) is dating Leone's daughter, Susanna (Gioia Spaziani), or that the two men's younger sons, Pietruccio (Walter Dragonetti) and Lele (Simone Ascani), are best friends. The rivalry between the two shopkeepers eventually leads to a heated public argument, in which Umberto refers to Leone's Jewish faith in a derogatory manner. A policeman overhears this, and Leone, who had previously been quiet about his Jewish heritage, soon finds himself having to deal with the sanctions being levied against Jewish citizens. As Umberto sees his neighbor slowly stripped of his property, his rights, and his dignity, his anger turns to sympathy and to a wish that he could do something to help a man not so different from himself. Concorrenza Sleale was directed by Ettore Scola, who previously examined Italy during Mussolini's rule in Una Giornata Speciale. ~ Mark Deming, Rovi

The characters have been so thinly developed that it is impossible to identify with any of them.

There are no featured reviews for Concorrenza sleale (Unfair Competition) at this time.