#Unfit: The Psychology of Donald Trump2020 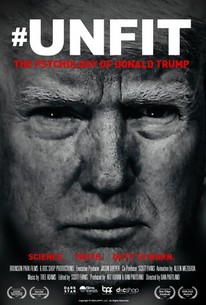 Is Donald Trump fit to hold the office of President of the United States? #UNFIT presents an eye-opening analysis of the behavior, psyche, condition and stability of Donald Trump. It takes a sociological look at the electorate that chose him, and the collective effect he is having on our culture and institutions. During the 2016 campaign, mental health professionals felt policy-bound from speaking publicly. Now, after years of observation, for the first time ever, they have decided enough is enough.

Critic Reviews for #Unfit: The Psychology of Donald Trump

Hopefully we care about these violations. Those who don't aren't going to be moved by this movie. However, #Unfit successfully makes its case concerning why Trump's psychological instability should be of concern to the public.

The illuminating film, more personal than political, argues that psychiatrists have a duty to speak out on the president's more disturbing behavior...

Despite its powerfully cogent and well-informed arguments, #Unfit... is sadly unlikely to change the minds of the roughly 35-40% of the population who look at the president's behavior and apparently see nothing to be concerned about.

#Unfit feels like a rational argument, and a powerful one. But if it's liable to scare lots of people who already oppose Trump, it doesn't feel as if it will change anybody's opinion.

As headlines, most of these insights may sound like old news. Yet "#Unfit" finds perceptive nuances within them.

It certainly won't persuade any Trump fans, but this documentary puts forth one of the clearest analyses of the 45th U.S. president's controversial, polarizing behavior.

Not only do they look at the man himself but the elements of a malignant narcissist. Facts and examples of him exhibiting this behaviour are brought forth.

It's a focused, sensible review of the man's outrageous public behavior that seemed, to me, free of Michael-Moore-style facetiousness.

From psychologists who have a Duty to Warn, a scary portrait of the consequences of the behavior of President Donald Trump.

It may not be reach viewers whose minds it wants to change. But to those willing to listen, it offers a terrifying warning.

Mental-health professionals, bound by ethics to point out danger, discuss how President Donald Trump is uniquely dangerous, a literal menace to society. Nay, not 'discuss': they are screaming it.

The witnesses present an inarguable case that the President, with his hands on the nuclear codes, is a danger to this country.

There are no featured reviews for #Unfit: The Psychology of Donald Trump at this time.