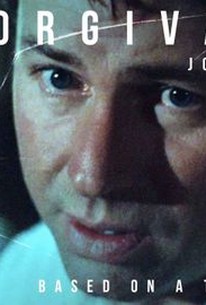 John Ritter brilliantly breaks loose from his lovable "Jack Tripper" characterization in the role of the seriously disturbed Paul Hegstrom. An abusive husband and father, not to mention a serial philanderer, Paul draws his "courage" from a whisky bottle. On one fateful evening, his violent impulses completely overwhelm him and he nearly beats his wife Judy (Harley Jane Kozak) to death. Just when it seems that Paul is utterly beyond redemption, he is put into an experimental "life skills" therapy program. Despite all evidence to the contrary, what is "unforgivable" at the beginning of the film can actually be forgiven by film's end, and the climax is astonishingly inspirational--and wholly credible, since it is based on a true story. Unforgivable made its first CBS network appearance on April 30, 1996.

George Sullivan
as Conrad
View All

There are no critic reviews yet for Unforgivable. Keep checking Rotten Tomatoes for updates!

There are no featured reviews for Unforgivable at this time.