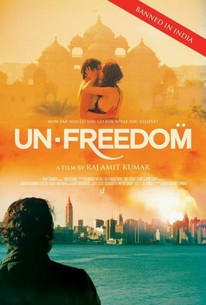 Rayvin Disla
as Jordan
View All

As accomplished and committed as most of the cast is, one doesn't so much find affinity with the characters they play as feel bad that they were compelled to enact such ugly movements.

A hard-line thriller derailed by messy editing and narrative silliness.

This two-for-one bundle of South Asian polemics panders to Western values and preys on Western ignorance. Why patiently comb through a culture or a religion for ambiguities when it's simpler to just dismiss it as barbaric?

It's not enough to just jab at hot-button topics. You need to do so with a deft hand. And as far as filmmaking goes, Kumar is all thumbs.

The awkwardly titled "Unfreedom" clearly waves the flag for acceptance and nonviolence - but it would be more effective if it invested as much in some cinematic nuance.

One can almost understand why this reprehensible film was banned in India, being utterly worthless, morally suspect, and an aesthetic outrage to boot.

Where the film falls down a bit is in basic storytelling, as it is easy to get lost in the cuts between India and New York, and even more so in the many jumps back and forward in time.

Sloppy editing can cause major confusion.

The film's troubled aesthetics are exacerbated by a screenplay that contains the trappings of amateur toil, including dialogue that harps on innocuous moments and trifling exposition.

There are no featured reviews for Unfreedom at this time.