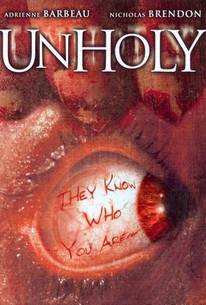 Daryl Goldberg's Unholy stars Adrienne Barbeau and Nicholas Brendon as a mother and son who must save their family from a complicated conspiracy involving elements as disparate as a witch, the United States government, and Nazi occultists. The script, by Samuel Stephen Freeman, is based loosely on actual events described in Nazi papers seized by the Allied forces.

Siri Baruc
as Hope
View All

There are no critic reviews yet for Unholy. Keep checking Rotten Tomatoes for updates!

There are no featured audience reviews yet. Click the link below to see what others say about Unholy!