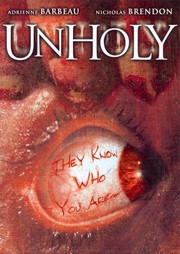 Joan O
February 7, 2014
Adrienne Barbeau and Nicholas Brendon must had needed the money and to say it was base on facts - NO WAY. But I am a fan of both so a star each.

John W
½ July 24, 2012
I fall firmly into the 'wanted to like this a lot' camp. A great premise, fond memories of Adrienne Barbeau in movies like Swamp Thing and being a big fan of Nicholas Brendan on BTVS, I was looking forward to seeing it. Unfortunately, that was not even close to enough to pull this movie through its long, long list of shortcomings that only get more preposterous as the movie progresses.

I wanted to like this movie a great deal more than I did; the concept is amazing, and the acting is, in general, up to that standard. Unfortunately, it takes a few wrong turns in the script, and the farther on we go, the more lost we become, until there is a point towards the end of the movie where you know you're never going to find your way back to that luminous path of potential on which you started out.

Plot: Martha (Adrienne Barbeau) is a distraught mother. She has just (in the movie's opening sequence) unsuccessfully attempted to talk her daughter, Hope (Thralls' Siri Baruc), out of suicide. Her other child, Lucas (Pinata: Survival Island's Nicholas Brendon), comes home to help her cope, and the two of them start looking for answers. The more they dig, the weirder things get.

Saying what they start finding, even close to the beginning, would be plunging deep into spoiler territory, so I'll just say that while it's nothing you haven't seen before, scriptwriter Sam Freeman takes a number of disparate things you've seen and attempts to put them together in such a way as to be, if not wholly original, at least well on the way. And from what we can see of the big picture by the time we get to the end, he was really on to something. Too bad he doesn't seem to have spent a great deal of time thinking about internal consistency in his conceit, which leads to some moments where the viewer is shaking his head and wondering why no one thought to question this or that angle. Unfortunately, if you're working in this sort of speculative vein, the sort of internal consistency we don't get is exactly what the script needs to carry everything off. Which turns this from a movie advertising endless possibilities into something of a slog.

Worth checking out for the concept, but don't expect to enjoy it much. **

Amy H
½ February 2, 2012
What is this movie about?? It started making some sense and then it went off in some wild weird storyline that doesn't even make any sense?? Based on actual events?? Boring!

Caity M
February 20, 2011
Alright, it tried. It could have been a good movie, if more developed. There was makings for good stuff but as it was, just didn't cut it.

michael b
October 9, 2010
one word: necromancer

Kasia W
September 22, 2009
Most fucked up movie ever. Nazis? Time travel? The whole time I had no idea what the hell was going on.

Private U
March 9, 2009
I have to give the movie props for trying to put a new spin on horror movies, but it fell short of anything good. Definitely creeped me out a bit with the brutalizing flashes of torture, but still wasn't worth the time.

Jason D
December 6, 2008
This small, yet ambitious film takes a breath of fresh air by trying to be different and unique from the rest of the Direct to DVD schlock that comes out these days. Adrienne Barbeau (I don't care how old she is, I would still fuck her) is a widow whose daughter commits suicide one day, which opens up a HUGE can of worms that leads her into a dark corner of the world involving government-funded occult conspiracies that involve Nazi scientists developing the unholy trinity of experiments: Time Travel, Mind Control, and Invisibility. Helping Barbeau's character is her son, played by Nicholas Brendon. The story finally leads to a so-so twist and climax that was somewhat predictable, but oh well. With this kind of film, everything would have to come full circle, especially given the sometimes very confusing material. Still, it's not a bad film by any means. Kudos to the filmmakers for trying something a bit different.

Super Reviewer
Ken D
November 22, 2008
What a waste of a couple of decent performances on a horrible story like this. It was so slow, boring and confusing.

Veronica B
October 4, 2008
This was a sorry movie. I guess Adrienne Barbeau must have been desperate for a movie role!

LOVING THIS SHIT!
September 29, 2008
all you dumbasses who say this movie had a bad story line or plot or whatever just got sucked right into the mind control aspect, shit even invisibility, cause you stupid fuckers couldnt see it coming, the movie has a lot of time and effort put in, which is why so many closed minded saps think it sucks, but everyone I know with a fuckin brain thought it was great so good job on unholy, poor job on americas spiritual enlightenment. people movies that are perfect are for intuitionally imbalanced, appreciate what this movie means, more than how it looks, fuckin surface scrapers

Dome W
½ September 6, 2008
Well I have known about this movie for while because of the viral marketing before it came out. I would say a very ambittous story packed into a mediocre horror flick that didn't held up with my expectatins but hey Nicolas Brendon is in it. You can give it a try at yor own risk.

kevin s
½ August 27, 2008
A very ambitious horror flick that fails to live up to expectations due to a plot that wants to do everything. Not very coherent and the ending is frustrating as hell. Save for a great performance by Adrienne Barbeau, I'd recommend skipping this one.

Simon B
½ August 22, 2008
Annoying movie. I was siting the whole movie wishing that the fucking lady would just die. Somebody please kill her. Extremely bad acting and script. What the fuck. Just die!
Page 1 of 3