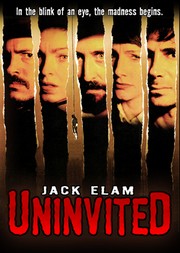 Michael S
½ January 21, 2011
It is really hard to mix westerns and horror, so I have to give this film credit for doing its best- and doing fairly well, actually. I've seen Christopher Boyer, and Jack Elam in other westerns, and enjoyed their performances- even if Boyer's was a little bit of a play on the stereotype.

As a ghost story, it works pretty good, and probably worked well as a TV movie. As a theatrical horror film, it doesn't work as well due to the slow pace, and low intensity scares, which could cause audiences to zone out a bit.

The characters could be considered stock characters, since they aren't developed well enough to get an audience to really care about them. The one character that IS developed decently is the central antagonist, played by Boyer.

While there are some scenes that use the play of light and shadow to create a good atmosphere, the filmwork in general is kinda bland and doesn't engage the senses.

Having said that, I might be inclined to watch this again if I was in the mood for a quiet, more low key horror film.
Page 1 of 1