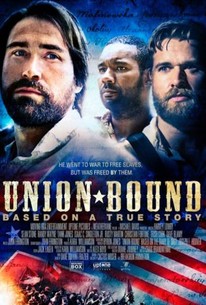 Union Bound is the amazing true story of Joseph Hoover a Union Soldier who witnessed many incredible moments during the terrible carnage of the Civil War. He wrote two diaries which survive today. In 1864 he was captured at the battle of the Wilderness and was taken to the notorious camp "Andersonville". After four months he was transferred to Florence, SC to a new camp. Together with a friend he escaped. They were aided by slaves and what is now known as the "underground railroad" to get to freedom. Joseph was later wounded in the war but survived. After the war he went back to his farm in upstate New York and worked as a cabinet maker. He went on to live to be 84.

Sherry Morris
as Nurse
View All

This low-budget historical drama (reportedly based on the diary of a real Civil War veteran) swings back and forth between being earnestly amateurish and comically inept.

Apparently motivated by a desire to promote a message of racial cooperation, the film is quite handsome, given its meager resources, but it has the misplaced priorities of a civil rights parable that is more interested in Miss Daisy than in her driver.

There are no featured audience reviews yet. Click the link below to see what others say about Union Bound!