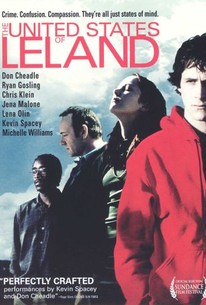 Critics Consensus: The United States of Leland has its moments, but they're undermined by a muddled plot, unsympathetic characters, and frustratingly uneven performances.

Critics Consensus: The United States of Leland has its moments, but they're undermined by a muddled plot, unsympathetic characters, and frustratingly uneven performances.

Critic Consensus: The United States of Leland has its moments, but they're undermined by a muddled plot, unsympathetic characters, and frustratingly uneven performances.

The United States of Leland Videos

The United States of Leland Photos

Produced by Kevin Spacey, The United States of Leland is a psychological drama concerning the aftereffects of a brutal murder. It's also the first big-studio theatrical release for writer/director Matthew Ryan Hoge, whose previous work consists of the independent comedy Self Storage. Ryan Gosling plays Leland, an imprisoned teenager doing time for the stabbing murder of a disabled boy. Prison writing teacher Pearl Madison (Don Cheadle) gets caught up in the story with the intention of making a book out of it, especially when he finds out that Leland's father is the famous novelist Albert Fitzgerald (Spacey). Pearl's investigation uncovers some of the details and effects of the murder for everyone involved, including the victim's parents, Harry (Martin Donovan) and Karen Pollard (Ann Magnuson). Jena Malone plays Becky, the teenage junkie who is both Leland's ex-girlfriend and the victim's sister. The situation also complicates the relationship between Becky's older sister, Jennifer (Michelle Williams), and her sensitive boyfriend, Allen (Chris Klein). The United States of Leland premiered at the 2003 Sundance Film Festival. ~ Andrea LeVasseur, Rovi

Joy Wood
as Cop No.1

Michael McCleery
as Mechanic No.2

Ty Hodges
as Student
View All

Critic Reviews for The United States of Leland

People under 30 or those of a youthful mindset may see cracked reflections of their own lives in this morally intricate tale, but I can't help but think those of previous generations will wonder what all the fuss is about.

An intriguing movie about how badly we really want to know the unknowable, what makes kids kill other kids.

A sidetracking subplot about Madison's adulterous fling with a co-worker goes nowhere; it is one of several unsatisfying, tertiary plot strands.

Isn't it sad that a boy like this could feel so lost that he had to kill someone? Well, maybe. But isn't it sadder that someone's dead?

Written and directed by Matthew Ryan Hoge, the script is not only profound, but incredibly tight, nuanced with subtleties and sub-plots that intersect and come together at all the right moments.

"The United States Of Leland" deftly points out dilemmas in current American ideology that frequently escalate into tragedy.

A very good film about the utter senselessness of murder...

Hoge seems to take delight in the fact that the film's conclusion is so frustratingly vague, whereas in fact it's both annoying and disappointing.

Kevin Spacey, who produced the film, is wasted in completely unnecessary role.

Audience Reviews for The United States of Leland

Crime. Confusion. Compassion. They're all just states of mind. Great Film! In short, it is a well acted, well directed ×movie. The story is not a feel good one, but I feel if you don't come away from the ×movie feeling good, you may just have missed something. Gosling gives an incredible performance that really only somebody of his extreme talent could deliver. Somehow, Gosling is able to make the killer of an autistic child sympathetic. To characterize it as "art house" is unfair, in my opinion, but as our society likes labels, this is probably the one that fits. If you find you know everything there is to know about the world... I'd suggest skipping this one. If you feel movies should be a form of escape "from the world"... you won't find it here. But if you do watch it... you just might find something in yourself. After stabbing an autistic boy, the sixteen year old troubled and pessimist Leland P. Fitzgerald is sent to a juvenile detention. His teacher and aspirant writer Pearl Madison gets close and tries to understand him, first with intention of writing a book, and later becoming his friend. Leland slowly discloses his sad vision of world.

Ryan Gosling, and Don Cheadle, are fantastic in this interesting take about a teenager who commits a murder, but can't recall the crime. Gosling's character, with his gentle demeanor, make it hard to grasp why he would do such a thing. Young Ryan's range of talent really shines here. He has such a way about his display of cool emotions that I find mesmerizing. Really well done film...

"I think this is the film that really had me start paying more attention to Ryan Gosling, who is now a big favorite of mine. He plays such a complicated troubled soul in this film. His performance will make you take notice of him if you have yet to. I got very wrapped up in the story and these character's. It is an unconventional story that delivers an intense look inside a family full of tragedy. Leland Fitzgerald is quite insightful and the things he says are really thought provoking. It's just a really great film."
Leland: "I think there are two ways you can see the world. You either see the sadness that's behind everything or you choose to keep it all out."

Leland: "The worst part is knowing that there is goodness in people. Mostly it stays deep down and buried. Maybe we don't have God because we're scared of the bad stuff. Maybe we're really scared of the good stuff. Because if there's no God, well, that means it's inside of us and we could be good all the time if we wanted. So when we do bad things, it'd be because we want to or because we have to. Or maybe we just need the bad stuff to remind us what the good stuff is in the first place."

There is something about Ryan Gosling that attracts films of a Psychological nature. Whilst the topic of this film, could so easily have appeared an open and shut case, we delve into a much deeper psyche in an almost Devil's Advocate view of the events. This one could open up to discussion and debate about the rights and wrongs etc etc, another good role for the talented young Actor.

The United States of Leland Quotes