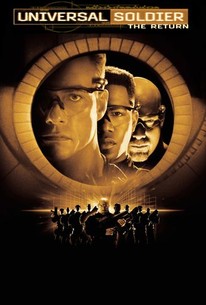 Critics Consensus: Universal Soldier - The Return fails on almost every level, from its generic story to its second rate action and subpar performances.

Critics Consensus: Universal Soldier - The Return fails on almost every level, from its generic story to its second rate action and subpar performances.

Critic Consensus: Universal Soldier - The Return fails on almost every level, from its generic story to its second rate action and subpar performances.

Jean-Claude Van Damme returns as cybernetic warrior Luc Deveraux in this sequel to the 1992 action hit. After barely surviving his experiences as a part-human/part-robot Universal Soldier, Luc has opted to stay out of the front lines and work with a military project to refine and perfect the system. However, something goes wrong (as they so often do in films like this), and S.E.T.H. (Michael Jai White), the android supercomputer leading the new breed of soldiers, suddenly develops a murderous mind of his own. Soon S.E.T.H. is leading his fellow war machines on a rampage, and Luc is the only one who can stop them. The supporting cast includes Heidi Schanz and wrestling star Bill Goldberg.

You, dear moviegoer, must not buy a ticket to this badly programed sequel. You must save the world from Universal Soldier III: How Bad Can It Get?

If Universal Soldier: The Return isn't the dullest, most derivative, unimaginative, noisy, repetitive, mind-numbing and generally imbecilic movie of the year, it's not because director Mic Rodgers wasn't trying hard enough.

Whereas Emmerich's original had enough personality and energy to provide solid (if stupid) entertainment, Rodgers seems content to merely cobble together a succession of blatantly lifted-and poorly executed-set-pieces

For the record, this is the fourth Universal Soldier movie if you count two cable sequels, but why would you?

It's actually the fourth entry in the series, after a couple of straight-to-cable sequels. That's a lot of pulp to squeeze out of a concept that was fairly juiceless to begin with.

An underwhelming follow-up to one of the career-stalled action star's better efforts.

Watching a bunch of dull characters hurtling through a plate glass window about 50 times is neither inventive nor exhilarating, proving perhaps that ex-stunt co-ordinators shouldn't be allowed a stab at feature film directing.

This is cynical, manipulative, idiotic film-making. It's hard to express how bad this film is.

Please, even if it means offsetting a planned schedule, do not see this movie. It could be the biggest mistake of your life. I should know: I made it.

Close your eyes and repeat after me: pro wrestlers must never ever EVER try to act.

Hopefully this is the last we have seen of the Unisol series, but unfortunately the dearth of creativity in Hollywood, will allow it to live for another abysmal dumbing.

I would suggest that you use this film solely as a form of torture.

Sequel to Universal Soldier brings mindless action to a new level. However does it pay off? Well let me start by saying that the original film, although not the best action film, it certainly wasn't the worst either. But this film lacks anything that made the first one worth seeing. This is a mediocre action flick that has poor acting, a poor plot and sloppily thought out action scenes that simply fail to thrill. Universal Soldier: The Return feels lazy and it is clear that the filmmakers didn't care about creating something as exciting as the first. Universal Soldier was thrilling, fun and mindless popcorn action that worked because of an interesting idea. However this sequel tries too hard at bringing more depth to the UniSol franchise and it just doesn't succeed because the script is too sloppy and is limited to paper thin ideas that simply don't take off. Also one of the big problems with this sequel is that they tried to give Van Damme's character too much personality, and the result is not impressive, and leaves a lot to be desired. There is not much to offer fans of the first, and a few ideas were recycled from the previous one. This is a lacking film that just fails in terms of an effective and memorable action film. The script is laughable and the acting is wooden, with no standout performances. Even in terms of a mindless action yarn, Universal Soldier The Return just doesn't cut it. I much more enjoyed the first film, even with all its flaws, it was fun and engaging to watch, however this sequel is void of great action and interesting plot.

Despite being a direct sequel to the original 92 hit this film has since become defunct and ignored within the UniSol franchise. That is of course on top of the two made for TV films which are also ignored, so really the UniSol franchise is a bit of a mess. You can see why this film was not a hit upon release and since ignored. The whole look of the film is not much better than the previous made for TV films. Everything is set within your standard cliched generic military base/weapons experimentation type facility, it all looks very dull, very grey and with plenty of glass and computer monitors to shoot up hehe. The plot about the master computer brain taking over the UniSol project it looks after and basically setting all the UniSols free is basic but reasonable. This equal lots of faceless military types getting shot to pieces every 5min and plenty of 'Terminator' style posturing from the UniSols. The saving grace being the fight between JCVD and White, White being one of the best visual fighters in the biz. Unfortunately Goldberg doesn't quite get the true fight he deserves and merely lurches around as comical relief half the time, if you can call it that. The whole film feels very watered down and not really in the same adult vain as the original film. There is even a 'Hal' moment in the film clearly ripped from '2001', its like they are trying too hard with the material. End of the day this film hasn't broken away from the 'made for TV' look n feel of the previous two efforts.

Not all that good. I thought it was best to just leave it alone after the first one.