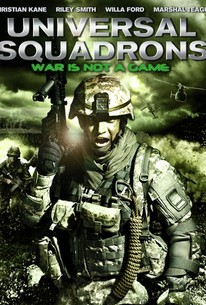 An American soldier begins to suspect he was experimented on during the war after returning home from Iraq and experiencing a series of disturbing visions. When Captain Lance Deakin (Riley Smith) was on tour, he spent much of his time playing a hyper-realistic combat video game called Minuteman. Later, after returning home to his girlfriend, Captain Deakon becomes the target of stealth killers, and uncovers evidence that the military was working to transform him into the perfect soldier. Now, as his hallucinations grow increasingly vivid and the walls start closing in, Captain Deakon searches desperately for the answers that will reveal the dark truth about the military's greatest secret. ~ Jason Buchanan, Rovi

There are no critic reviews yet for Universal Squadrons. Keep checking Rotten Tomatoes for updates!

Mark Millhone's Universal Squadrons AKA Minuteman hints at promise, but struggles to deliver. Moving in at 80 minutes, the story never finds its footing. The pacing is inconsistent, while the plot details are half of what they should be. The combination of science fiction and drama never full comes together with the drama seizing control most of the way. The violence is enough for a mature audience and the action holds some potential, but is limited in quantity. Most of the combat situations are unleashed in the film's mess of a finale. Riley Smith and Willa Ford are much better than unknowns; of course that's not to say that they make this a recommendable picture. It would be a surprise if this is not where most of the budget went. Universal Squadrons fails to be the worst; however, it also fails at reaching mediocrity.