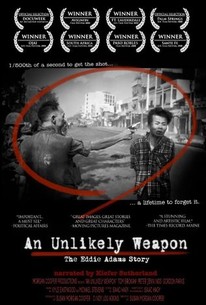 The weapon in question is not a firearm (as might be expected) but a camera: from the 1950s through the early 21st century, photojournalist and sports photographer Eddie Adams (1933-2004) caught a series of indelible images through his lens that dramatically reshaped the way in which the general public perceived the world. Adams perhaps gained broadest recognition for his wartime photography, delivering his most leaden punch in Vietnam, with a series of gritty, grainy, and shocking images that never shied from revealing the carnage and vile brutality of the war; in particular, his image of General Nguyen Ngoc Loan executing a Vietcong prisoner via a gunshot to the head attained iconic status and led many to attribute the U.S. withdrawal from Vietnam to Adams. Yet Vietnam only represented one of the photographer's coups; among other accomplishments, he "served" in 12 additional wars and used a series of photographic images to convince then-president Jimmy Carter to offer asylum to 200,000 boat people from Vietnam. In her documentary An Unlikely Weapon, filmmaker Susan Morgan Cooper takes on Adams as her subject, and -- shearing away all explorations of his personal life and history -- focuses exclusively on his professional life and personal vision as a photographer. Cooper cross-cuts between onscreen images of Adams's work and revealing interviews with many of his colleagues including Morley Safer, the late Peter Jennings and Tom Brokaw.

Kiefer Sutherland
as Narrator
View All

News & Interviews for An Unlikely Weapon

View All An Unlikely Weapon News

Critic Reviews for An Unlikely Weapon

A picture of a complex mind with a gift for capturing humanity and inhumanity with heartbreaking force.

As chock-full of insights -- from Peter Jennings, Peter Arnett, Gordon Parks among others -- it is the famed war photojournalist's works that still create space to be startled, to be rewired.

It's their reminiscences that are the most poignant and revealing about a man who seems, in Cooper's interviews, to have done all he could to conceal himself.

In the documentary An Unlikely Weapon, Adams and people such as Tom Brokaw, Peter Jennings and Morley Safer talk extensively about his career as a photojournalist for The Associated Press and later for Time, Parade and even Penthouse.

The man had stories to tell, in person and in his pictures.

The strongest material in An Unlikely Weapon contemplates the import of that shot, and of photojournalism itself, on the events of its time.

I dare say that the film would have likely looked much better had Adams himself been behind the camera.

Those previously unfamiliar with Eddie Adams will be mostly fascinated and somewhat intrigued, but, for everyone else, An Unlikely Weapon serves merely as a pedantic, Reader's Digest version of Adams' career rather than as truly revealing and illuminating

Documentary about the Pulitzer Prize-winning photojournalist and celebrity-portrait photographer Eddie Adams, whose image of a 1968 street execution in Saigon became an icon of the Vietnam War.

Adams, one of the great American photojournalists, is more than deserving of a documentary tribute. Unfortunately, for all its good intentions, An Unlikely Weapon is not that documentary

Photographer Eddie Adams is the subject of Susan Morgan Cooper's incisive documentary about the man who took the picture credited with helping bring an end to the Vietnam War.

Though Morgan's non-fiction techniques are only serviceably straightforward, the director engagingly makes clear that Adams' most renowned image haunted him but did not, ultimately, define his work.

There are no featured reviews for An Unlikely Weapon at this time.