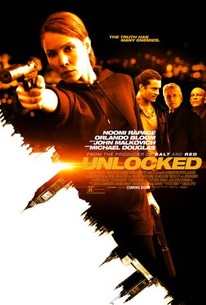 Critics Consensus: Unlocked strands an all-star cast in a spy thriller whose embrace of old-school formula might be refreshing if it weren't bogged down in genre clichés and a predictable plot.

Critics Consensus: Unlocked strands an all-star cast in a spy thriller whose embrace of old-school formula might be refreshing if it weren't bogged down in genre clichés and a predictable plot.

Critic Consensus: Unlocked strands an all-star cast in a spy thriller whose embrace of old-school formula might be refreshing if it weren't bogged down in genre clichés and a predictable plot.

After failing to apprehend the terrorist behind a Paris attack that claimed dozens of lives, CIA agent Alice Racine (Noomi Rapace) is forced to live in London as a caseworker. Unexpectedly, she is called back into action by her mentor, Eric Lasch (Michael Douglas), when the CIA discovers intel of another imminent attack. While "unlocking" the suspect, Alice discovers that the classified information she has uncovered has been compromised. Running for her life, Alice turns to ex-soldier Jack (Orlando Bloom) to prevent a lethal biological attack on the citizens of London..

[Unlocked] is staid and formulaic, though well-executed.

It would be a welcome treat to watch the Alice Racine chronicles, as she travels around Europe taking out terrorist cells with her combination of interrogation and combat skills.

When it mercifully ends after 98 excruciating minutes, you still don't have a clue what it was all about.

... while far from the sharpest cerebral spy thriller I've ever seen, it's safe to say still I enjoyed watching things play themselves out to conclusion, this journey behind the espionage looking glass one I'm glad I took.

Neither good enough to justify the talents on display nor bad enough to at least make it perversely memorable.

The film is made less awful, bordering into watchable, thanks solely to it's cast -- though they admittedly mostly phone in their performances.

A fruitful exercise in genre, the sort of flick that might have a healthy shelf life on Netflix.

A decent yet terminally erratic thriller...

The type of movie that, much like the content covered in this spy thriller, will go unseen by most and forgotten by those that saw it, as if it never even happened.

What Unlocked has is a lot of fast-paced action. [Full review in Spanish]

Below par on every front, even for a potboiler, it merrily chugs along from one cliché to the next, piling unbelievable scenes on top of each other.

The turn is the best part of Unlocked, and it was 100% revealed in the trailers. With a director as prolific Michael Apted at the helm, somebody who has been directing movies for over 50 years, you could be forgiven for thinking we might be in for something a little less middle of the road, but middle of the road is exactly what Unlocked delivers.