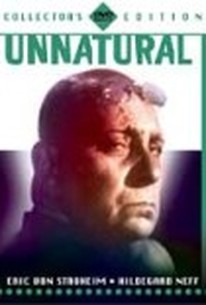 Also known as Alraune and Mandrake, The Unnatural is a kinky science fiction film, elevated by the bravura performance of Erich Von Stroheim. Playing a mad scientist (again?), Von Stroheim artificially inseminates an addled prostitute with the sperm of a vicious murderer. The result of this unholy union grows up to be Hildegarde Neff, who is none too stable herself. Combining the worst traits of both her parents, Neff lures unsuspecting males to premature deaths. Just when Neff is about to consummate her first genuine romance with Karl Bohm, she is killed by Von Stroheim, who has long harbored incestuous feelings for his "foster daughter." Officially, The Unnatural was adapted by Fritz Rotter from a novel by H. H. Ewers, but one has the impression that Von Stroheim might have dropped a few suggestions of his own here and there.

A hokum sci-fi film that only resonates because Von Stroheim is at his Prussian best as a man possessed by his incestuous love for his foster daughter.

There are no featured audience reviews yet. Click the link below to see what others say about Unnatural!