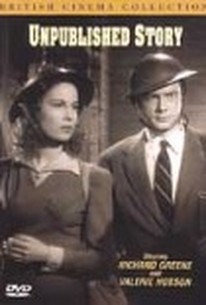 Bob Randall (Richard Greene) is a reporter who gets to witness first-hand the British retreat from Dunkirk in May of 1940. He returns to his job in a London now facing nightly German bombing raids, and finds himself saddled with Carol Bennett (Valerie Hobson), a neophyte reporter. Bob is eager to take on the Nazis and, in the absence of any on the ground that he can fight, he turns to the leaders of a pacifist movement, The People for Peace. But no sooner does he start to look into who they are than he finds himself being shadowed by mysterious men and stirring up a hornet's nest of activity in his wake. While Carol tries to keep up and do her bit, and Bob tries to look out for her and find out just what he's stepped into -- which soon involves kidnappings and murder -- the German bombers keep coming and the newspaper's survival is threatened. Bob and Carol are drawn together romantically in the midst of these overlapping crises, and manage to find some time for each other while helping their long-suffering editor (Brefni O'Rorke) save the newspaper and the British secret service save the country. ~ Bruce Eder, Rovi

There are no critic reviews yet for Unpublished Story. Keep checking Rotten Tomatoes for updates!

There are no featured reviews for Unpublished Story at this time.