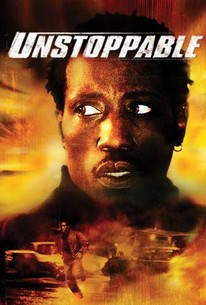 In this thriller, Dean Cage (Wesley Snipes) is a former Special Forces operative who finds himself at odds with the government he used to serve when he's kidnapped by intelligence agents who have mistaken him for another Special Forces veteran. To keep tabs on the suspected agent's activities, the intelligence men dose Cage with a special mind-controlling hallucinogen, which allows them to plant images into his brain of their choosing. Cage must now sort out what is real and what is a mirage in the world around him as he struggles to prove his true identity. Produced under the title Nine Lives, Unstoppable also stars Stuart Wilson, Kim Coates, and Jacqueline Obradors. ~ Mark Deming, Rovi

Unstoppable is an underwhelming action/drama with Wesley Snipes as a retired Special Forces. The acting is awful. The script is filled with stupid situations just for the sake of blowing something up. There's no logic or even an attempt to make things slightly realistic or interesting. Plot holes, clichés, there's so much wrong with this it's a wonder how someone approved the script.

I caught this one on TV and the only reason I watched it was because it was supposed to take place in Baltimore. It was pretty terrible. I mean the lead detective had to be the most unobservative cop ever. And some simple communication could have made the situation a whole lot better. Not to mention the special effects were TERRIBLE. I mean, it came out in 2004 but it looked like a cheap early 90s flick.

Wesley Snipes's thriller film doesn't excite me as what I thought it was alike The Bourne Identity and Enemy of the State.