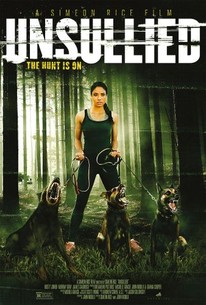 When car trouble strands track star Reagan Farrow (Murray Gray) in the Florida boondocks, she accepts an offer of help from a pair of charming strangers (Rusty Joiner and James Gaudioso) only to find herself trapped in a brutal backwoods nightmare. Held captive in an isolated cabin, Reagan manages to escape and take refuge in the forest. Relentlessly pursued by the savage sociopaths who kidnapped her, Reagan will need all of her inner strength and resourcefulness in order to survive in Unsullied, a gripping thriller that marks the feature-film directing debut of NFL superstar Simeon Rice. (C) Dreamline Pictures

The movie flirts with 1970s exploitation revenge pictures, complete with a 1971 Chevrolet Chevelle Super Sport, but comes up short on the attendant payoffs.

Unsullied was made by a director with real promise. It's a shame Rice picked this turkey to shoot as his first.

Flat cinematography and clunky action give "Unsullied" the feel of an amateur film, the sort of horror fare that regularly runs on basic cable in the wee hours.

Hardcore exploitation fans might find Unsullied a bit toothless, and the ending is clunky, but on the whole, it's engaging, fast-paced entertainment that refreshingly doesn't stick to tired genre norms.

Unsullied boasts a solid thru-line, strong characters and high production values. Characters are fully fleshed out and well defined while some surprising plot twists keep the audience on its toes. Tension and suspense are palpable.

While the film does have a lot to offer, it isn't able to carry that momentum all the way through to the end. Regardless of some of the film's issues, however, Simeon Rice has a lot of potential in his future as a filmmaker.

There are no featured audience reviews yet. Click the link below to see what others say about Unsullied!