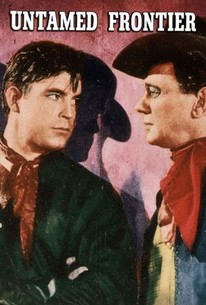 Reportedly, there was no love lost between the three stars of Untamed Frontier, and perhaps it was this tension that added so much depth to this otherwise formula-bound western. Joseph Cotten plays Kirk Denbow, the straight-laced son of ruthless cattle-baron Matt Denbow (Minor Watson), while Scott Brady co-stars as Glen Denbow, Kirk's firebrand brother (shades of Duel in the Sun, which also starred Cotten). Waitress Jane Stevens (Shelley Winters) witnesses a murder committed by Glen, then is railroaded into marrying him to prevent her from testifying in court. Inevitably, Jane falls in love with Kirk, the first of several fateful steps which lead to the film's bloody denouement. The late Suzan Ball, whose screen career was so tragically brief, makes her movie debut in Untamed Frontier. ~ Hal Erickson, Rovi

While Director Hugo Fregonese starts the proceedings at a brisk pace, it becomes obvious that both he and the three scenarists... intended to fashion a medium-sized Duel in the Sun, piling on the same contrived tawdriness.

The plot is hackneyed, the playing unconvincing and the direction stereotyped.

Though smoothly directed by Mr. Hugo Fregonese, it has little new to offer on the hoof situation.

Get that horse out of the corral, pardner, saddle him, and start riding hard, cause we're in the middle of another of those settlers- versus-cattlemen oat operas.

Nice color photography and a honey of a stampede are assets to be weighed against a garrulous script and several wooden characters in this cow-country drama.

I'm afraid the Untamed Frontier' is about as wild as a Thursday night euchre party.

There are no featured reviews for Untamed Frontier at this time.