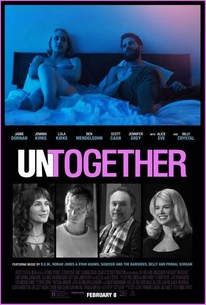 UNTOGETHER is the story of Nick (Jamie Dornan) and Andrea (Jemima Kirke) whose one night stand evolves into something more, though the exact parameters are blurry and undefined. He is a doctor and author whose heroics in the Middle East gained him international fame. She is a writing prodigy fully consumed with destructive vices, navigating Los Angeles without a driver's license or credit card and sharing a home with her sister Tara. Meanwhile, Tara (Lola Kirke) is dealing with relationship issues of her own as she slowly slips away from her boyfriend Martin (Ben Mendelsohn), who gave up his Australian fame as a rock 'n' roll god to be with her. Her way of acting out is to lose herself in religion and seek solace in a charismatic Rabbi (Billy Crystal). This is who they've all been so far but do they have the courage to find out who they really are?

Scott Caan
as Ellis
View All

The LEGO Movie 2: The Second Part Is Certified Fresh

Follows several screwed up, trendy, aging hipster Angelenos who you really don't care about... It's awkwardly paced [and] the stories are wan.

Untogether is a very poorly made film with no real conclusion, and does nothing to dispel the notion that sometimes wealthy people make movies just because they can, not because they should.

If only the film itself were willing to be a little more untogether, to lose control occasionally and show us something new and unpredictable.

Another anemic and pointless stringing together of stories that are not worth telling, Untogether follows the truncated lives of a group of lost souls in Los Angeles with an overdose of paralyzing cinematic anesthesia.

Despite flashes of something greater at work, it's a largely unsatisfying, unevenly-paced drama.

It is a perfectly serviceable movie; a bunch of good-looking people adrift and looking to connect [...] I guess I just wish the movie had a bit more heart.

Even if Untogether doesn't always come together, it still possesses hints of greatness. It's a solid directing debut from Emma Forrest and I'm curious to see what potential projects she does going forward.

For a comedy, this is all rather grim, but it's also profound.

A mixed bag, the film isn't altogether satisfying, apart from watching the actors engage themselves fully in their portrayals.

Untogether is a bit shallow at times, as it splashes around in romantic waters, but mostly it is a welcome breath of air.

It's ultimately a movie made of half-formed ideas that struggles in figuring itself out. The cast is fantastic, but their talents are wasted on underdeveloped characters and a marginally thin and all over the place story.

There are no featured audience reviews yet. Click the link below to see what others say about Untogether!