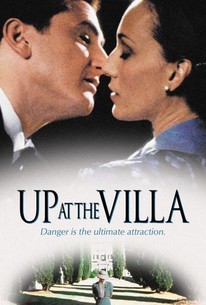 Critics Consensus: A poor script and an aimless plot keep this film from engaging the audience.

Critics Consensus: A poor script and an aimless plot keep this film from engaging the audience.

Critic Consensus: A poor script and an aimless plot keep this film from engaging the audience.

Up at the Villa Photos

A woman left alone by the death of her husband finds her love life has become suddenly and dangerously complicated in this drama. Mary Panton (Kristin Scott Thomas) is a British woman living in Italy in 1938 who has been financially ruined by the death of her husband. Edgar (James Fox), an aging diplomat, asks Mary for her hand in marriage, and while she doesn't love him, she longs for the security of a husband and asks for a few days to consider the proposal. The next evening, Mary is invited to a party by an American socialite known as the Princess (Anne Bancroft); there, Mary meets Rowley Flint (Sean Penn), a rough-hewn and cocky American who is intrigued by her. Mary also feels drawn to Rowley, but their personalities clash, and they end the evening in an argument. Mary impulsively spends the night with Karl (Jeremy Davies), a young musician who played at the party. In the cold light of day, Mary decides that her fling with Karl is best left as a one-night stand, but Karl insists that he's fallen in love with her, and he melodramatically kills himself. Mary, desperate, calls upon Rowley to help her hide the body; he agrees, and soon they are both being questioned by local fascist leader Leopardi (Massimo Ghini) about Karl's disappearance. Up at the Villa was adapted from a novella by W. Somerset Maugham.

Gretchen Given
as Isa Mackenzie

Critic Reviews for Up at the Villa

The question is, why should audiences care? Apart from some beautiful scenic photography, this film gives them little reason to.

Up at the Villa is just lots of silly intrigue.

Beauty and bloodlessness battle it out in every frame of Villa, and no one comes out a winner.

Spends more time talking about trouble than it does pursuing it.

Almost less believable than the "far, far away" universe of Star Wars.

Here's a tip for casting directors: If you want your female lead to be sympathetic, do not hire Kristen Scott Thomas.

To inject some comedy into this dull film Derek Jacobi has a small part as a drag queen...

Unveils the different shades of love and the ways we can unsettle our lives through impulsive sex.

A travelogue that would be nice were it not so difficult to stay awake.

Audience Reviews for Up at the Villa

I had almost forgotten how dashing Sean Penn used to be quite a few years ago. The combination of Kristin Scott Thomas, and Sean Penn, is quite good in this nice little period drama. Slow moving...but nice.

I found the movie interesting. Mary has problems. She has no money, and she has been unlucky in marriage. She is proposed to by an Englishman quite a bit older than her. Now does she marry for convenience or not. Of course a young Sean Penn complicates things, and a local immigrant complicates things even more!

Up at the Villa Quotes