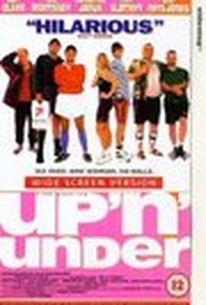 Up 'n' Under Photos

John Godber scripted and made his directorial debut with this adaptation of his 1984 play about an amateur rugby team. Decorator and ex-Rugby League player Arthur (Gary Olsen) accepts a high-stakes bet from Reg Welch (Tony Slattery), manager of the tough Cobbler Arms team. Arthur must train a team to beat the Cobbler Arms, and he chooses the weak Wheatsheaf Arms losers, a motley crew who would rather quaff at the local pub. They're uncooperative -- until Arthur introduces them to their new fitness instructor, attractive gym-owner Hazel (Samantha Janus of the Game On comedy series). The training sessions get underway, with Arthur keeping his big bet a secret from all concerned. Set in West Yorkshire, the film was actually shot in Cardiff, Wales. ~ Bhob Stewart, Rovi

John Thomson
as Stan
View All

Critic Reviews for Up 'n' Under

There are no critic reviews yet for Up 'n' Under. Keep checking Rotten Tomatoes for updates!

Audience Reviews for Up 'n' Under

Up 'n' Under Quotes