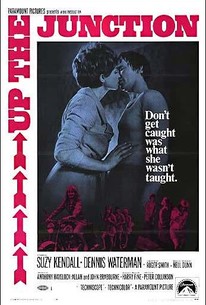 Up the Junction Photos

Based on a popular British novel by Nell Dunn, Up the Junction was a made-for-TV movie in 1965 before being remade for theatrical release in 1968. It features Suzy Kendall as Polly, an upper-class Chelsea girl who decides to relieve her boredom by slumming in a working-class section of London called Battersea. She gets a job in a candy factory and becomes friends with co-workers Rube (Adrienne Posta) and Sylvie (Maureen Lipman), two sisters. Polly takes up with Peter (Dennis Waterman), who dreams of leaving Battersea and becoming rich. ~ Michael Betzold, Rovi

Barbara Archer
as May

Critic Reviews for Up the Junction

It is rare to find a portrayal of a gentle young man without any air of effeminacy or saintliness. Dennis Waterman does the whole difficult thing exactly right.

[It assumes] good acting is the automatic result of a deep, uncritical, tough, saccharine grubbiness.

There are no featured reviews for Up the Junction at this time.

Up the Junction Quotes